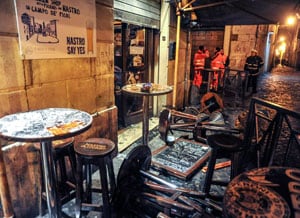 At least one person was stabbed Thursday, and seven were hospitalized.

The brawl took on anti-Semitic overtones, with witnesses reporting that the Italian hooligans shouted "Jews" at the Tottenham fans.

Tottenham supporters are often called the "Yid Army," and the team is known to have a large Jewish fan base from north London. Lazio fans are traditionally right-wing and often use fascist salutes and slogans.

Rome police say they detained some of the 50 or so hoodlums responsible for assaulting the British fans and trashing "The Drunken Ship" pub in Rome's Campo de' Fiori square, a popular drinking spot.

Comments
Topics mentioned in this article
Football Italy Tottenham Hotspur Lazio VfB Stuttgart
Get the latest updates on India vs South Africa and check out  Schedule, Results and Live Score. Like us on Facebook or follow us on Twitter for more sports updates. You can also download the NDTV Cricket app for Android or iOS.