Glenn Murray proved a thorn in Southampton's side yet again as Brighton came from two goals down to earn a 2-2 draw away to their south coast rivals in the Premier League on Monday. 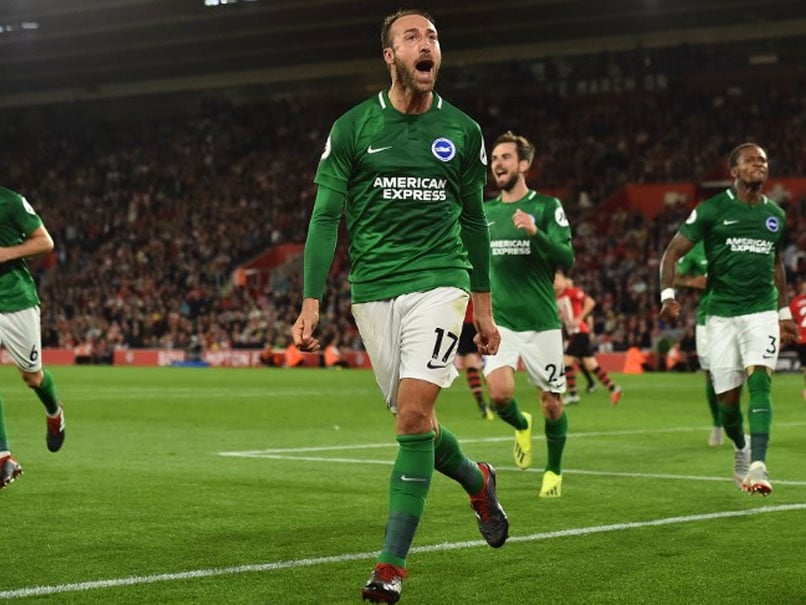 Glenn Murray proved a thorn in Southampton's side yet again as Brighton came from two goals down to earn a 2-2 draw away to their south coast rivals in the Premier League on Monday. Pierre-Emile Hojbjerg gave Saints the lead at St Mary's with a stunning long-range effort 10 minutes before half-time. And they made it 2-0 midway through the second half thanks to a penalty from Danny Ings. But two minutes later Brighton pulled a goal back through Shane Duffy's header and the Seagulls were level in the 91st minute when Murray scored from the penalty spot -- his third goal in as many games against the Saints.

It was the second game in a row where Brighton had come from 2-0 down to share the points following a 2-2 draw with Fulham.

This was also the third straight league draw between Southampton and Brighton.

The result left Southampton and Brighton 13th and 14th in the table respectively, the Saints just ahead on goal difference.

"It's the second game we've come back from 2-0 down," Brighton manager Chris Hughton told Sky Sports. "You have to look at the character but also some of the frailties that put us in that position in the first place, credit to the lads they responded well."

Reflecting on the equaliser, Hughton added: "At 2-1 down away from home and a penalty, you're not going to get a cooler head than Glenn Murray."

Meanwhile any pleasure Hojbjerg felt in scoring a brilliant goal was outweighed by his frustration in seeing Saints squander a 2-0 lead.

"It's not good enough," he insisted. "If you want to be serious and a contender you cannot let games like this go."

Hojbjerg added: "It's nice to make a good goal like this but I want to win, that's all that matters."

Southampton took a spectacular lead in the 35th minute.

Brighton headed a cross out from the penalty area and the ball fell to Hojbjerg.

From fully 36 yards out, the Dane let fly with a powerful shot into the bottom corner, the ball swerving in late from just outside the post. It was a strike that gave Mat Ryan, Brighton's Australian goalkeeper, little chance.

Mark Hughes's men doubled their lead in the 65th minute when, after a poor challenge by Gaetan Bong on Ings in the box, Ings himself scored from the ensuing penalty with a low strike past the right hand of the diving Ryan.

But two minutes later, Brighton were back in the game.

No Southampton defender made a move to cut out a long free-kick into the box and Seagulls centre-back Duffy headed in unchallenged from six yards out to reduce the home side's lead to 2-1.

Then, in the closing seconds of normal time, Brighton were awarded a penalty after James Ward-Prowse shoved Duffy over inside the box following a Seagulls corner and Duffy made no mistake from the spot.

There was still time for Southampton to launch one last attack but Ryan saved well from Ryan Bertrand.

Southampton Glenn Murray English Premier League Football
Get the latest updates on SA vs IND 2021-22, check out the Schedule and Live Score . Like us on Facebook or follow us on Twitter for more sports updates. You can also download the NDTV Cricket app for Android or iOS.