Earlier, Barca boss Luis Enrique accepted his side had struggled to shrug off the euphoria of a remarkable Champions League comeback against Paris Saint-Germain as the Spanish champions slumped to a shock 2-1 defeat at Deportivo la Coruna. 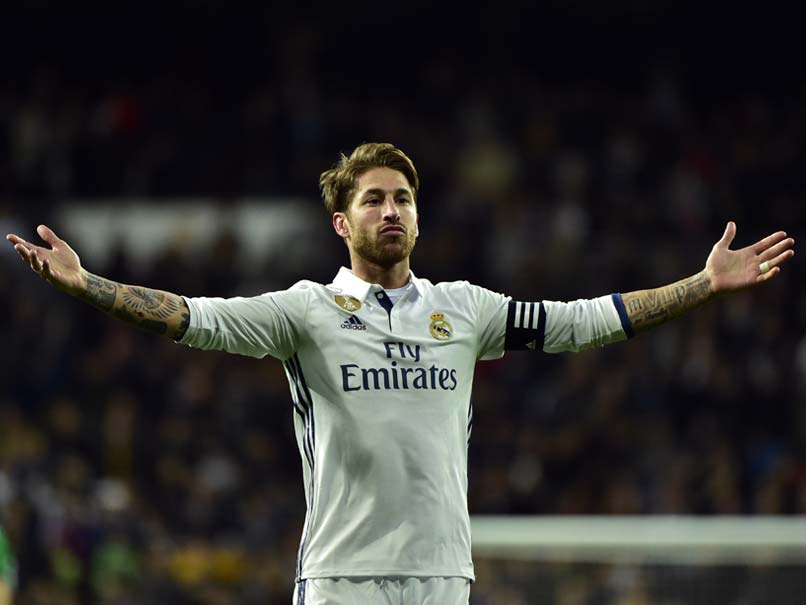 Real Madrid captain Sergio Ramos struck another late winner as the European champions usurped Barcelona at the top of La Liga with a hard-fought 2-1 win over Real Betis on Sunday.

Earlier, Barca boss Luis Enrique accepted his side had struggled to shrug off the euphoria of a remarkable Champions League comeback against Paris Saint-Germain as the Spanish champions slumped to a shock 2-1 defeat at Deportivo la Coruna.

Victory for Madrid moves Real two points clear of Barcelona and with a game in hand still to come.

"I would be happier if we scored two or three goals at the start," said Real coach Zinedine Zidane.

"But we remain calm because we know we can score at any moment."

However, Madrid's win was mired in controversy as goalkeeper Keylor Navas was extremely lucky to avoid an early red card before making a brilliant stoppage time save to deny Antonio Sanabria.

Navas clearly cleaned out Darko Brasanac on the edge of the Madrid area as he raced from his goal after just 20 minutes, but referee Antonio Mateu Lahoz inexplicably waived play on.

The hosts didn't benefit from Navas's presence just four minutes later, though, as he bundled Sarabia's shot into his own goal having appeared to have the effort under control.

"The most important thing for me is the support Keylor received from his teammates," added Zidane.

"They know how important he is and in the end he made a great save to get us the three points."

Cristiano Ronaldo ensured Madrid went in level at the break as he rose unmarked to power home Marcelo's cross from close range for his 26th goal of the season.

The visitors' chances of escaping with a point were dealt a huge blow when Cristiano Piccini saw a second yellow card 12 minutes from time.

And just three minutes later, fresh from scoring two vital away goals at Napoli to ease Madrid into the Champions League quarter-finals on Tuesday, Ramos powered home another Toni Kroos header for the winner.

Betis could still have salvaged a point, but Navas made amends for his early mistakes with a brilliant stop from Sanabria's powerful header.

At Riazor, a much-changed Barcelona side from the one that hammered PSG 6-1 suffered a body blow to their hopes a third successful title with a first league defeat since October.

Joselu had fired Deportivo into a first-half lead before Luis Suarez levelled in the first minute of the second period.

However, Alex Bergantinos rose highest from a corner to seal Deportivo's first victory over Barcelona since 2008.

"Obviously it was difficult. Only those that have experienced what we have this week knows what it means, but as professionals we know nothing is gifted to you," said Enrique.

Two-goal hero in midweek Neymar was one of five changes to the Barca side due to an abductor injury.

It took Deportivo 40 minutes to force Marc-Andre ter Stegen into a serious save as the German leapt to his left to brilliantly turn Joselu's volley behind.

However, from the resulting corner Ter Stegen was found wanting as he spilled Javier Mascherano's miscued clearance and Joselu was on hand to smash into an unguarded net.

Barca got off to a flyer in the second-half as Suarez lashed home a loose ball inside the area to equalise just a minute after the restart.

Enrique turned to Andres Iniesta and Ivan Rakitic for a winner in the final half hour as Arda Turan and Andre Gomes were sacrificed.

But Barca found it difficult to create clear-cut chances against the mass ranks of Deportivo defence, whilst the hosts were always a threat on the break.

Alejandro Arribas saw his header come back off the post, but once again having survived the initial threat, Barcelona conceded from the resulting corner.

This time Bergantinos got above Jordi Alba to head into the bottom corner at the far post.

Lux made a great save to deny Suarez a second equaliser, but Deportivo held out to give their hopes of survival a huge boost as they move eight points clear of the bottom three and up to 15th.

Comments
Topics mentioned in this article
Barcelona Real Madrid Football
Get the latest updates on ICC Women's Cricket World Cup 2022 and IPL 2022, check out the Schedule , Live Score and IPL Points Table. Like us on Facebook or follow us on Twitter for more sports updates. You can also download the NDTV Cricket app for Android or iOS.