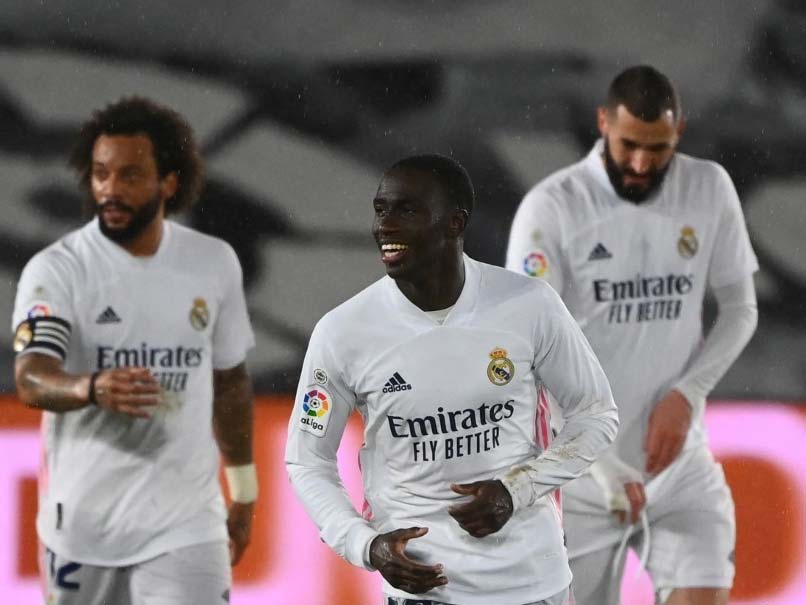 Ferland Mendy was among the scorers as Real Madrid beat Getafe 2-0.© AFP

A depleted Real Madrid moved to within five points of La Liga leaders Atletico Madrid on Tuesday by beating struggling Getafe 2-0. Madrid were without nine first team players, prompting Zinedine Zidane to adopt a 3-5-2 formation which he admitted they had not practised, with Marcelo and the 20-year-old Marvin Park as wing-backs. Karim Benzema and Ferland Mendy scored the goals at Valdebebas, with Mendy's finish teed up by his fellow left-back Marcelo, who revelled in his new role.

Madrid's victory puts them in sight of city rivals Atletico even if Diego Simeone's side have played two games fewer.

"We have to believe in ourselves, we have to fight," said Zidane. "There is a lot of the league left, a lot in front of us."

Atletico had slipped up for the first time in nine league matches on Monday night, a late equaliser conceded in a 2-2 draw with Celta Vigo giving Madrid and Barcelona a ray of hope in the title race.

And while the trophy remains very much in Atletico's hands, Madrid can only hope to increase the pressure by building some momentum themselves, especially with a Champions League tie against Atalanta around the corner.

Last week, an angry Zidane had castigated reporters for showing his team a lack of "respect" following a run of just two wins in seven matches, which included going out in both the Spanish Super Cup and Copa del Rey.

His players have responded, backing up a gutsy win over Huesca on Saturday by seeing off a Getafe side that look a pale shadow of the team that has challenged for the top four in recent seasons.

They drop to 13th, four points above the bottom three.

"We played with too much respect, too much fear," said Getafe coach Jose Bordalas. "We have to change and rediscover our identity."

To adapt, Zidane opted for a back three of Raphael Varane, Nacho and Mendy, with Marcelo at left wing-back and a surprise start for Park, who was born in Mallorca and coached at Tranmere Rovers in England before joining Madrid's youth teams in 2016.

"In the end we weren't able to prepare it or train very much but we spent a bit of time talking about it," said Zidane. "The players have delivered very well what we discussed, which is good because it's not a system we are used to playing with."

Casemiro and Benzema both missed chances early on, the latter grazing the crossbar with a header, before Luka Modric drew a good save after the first of many marauding Marcelo runs.

Getafe offered little, although Marc Cucurella had an opening in the box in the second half but took too long and the chance was lost.

Benzema struck on the hour, nodding in a pin-point cross from Vinicius Junior, who had dropped into the right wing-back slot after Park went off.

The second came six minutes later and was even better, Marcelo driving to the line before picking out the surging Mendy, who stretched out a leg and diverted in.

Karim Benzema Football
Get the latest updates on ICC T20 Worldcup 2022, check out the Schedule and Live Score. Like us on Facebook or follow us on Twitter for more sports updates. You can also download the NDTV Cricket app for Android or iOS.