The Spanish league season kicks-off this weekend with Barcelona star Lionel Messi insisting it is not just a battle between himself and Cristiano Ronaldo. 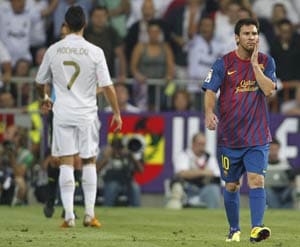 The Spanish league season kicks-off this weekend with Barcelona star Lionel Messi insisting it is not just a battle between himself and Cristiano Ronaldo.

"With Cristiano I have absolutely no problem. All that is said about us is to do with the press who want us to have our own personal battle but I have never competed with him or fought him," said the 25 year-old current holder of the FIFA Ballon d'Or. "I just try to do my job in the best way possible to win trophies for my national team and Barcelona", he continued after scoring in Argentina's 3-1 win over Germany on Wednesday night.

The two players were neck-and-neck in the goalscoring charts last season, with the Argentinian hitting 50 in the league compared to Ronaldo's 46, with an incredible 73 in all competitions for Messi and 60 for the Madrid star.

Madrid finished the season nine points clear of a Barca side that still managed to lift 4 titles in what was to be Pep Guardiola's last season of a hugely successful time for the Catalans.

The two giants kick-off the new campaign on Sunday with home games against Valencia and Real Sociedad, with one eye on their two-legged Spanish Super Cup encounter over the next two weeks.

The first-leg is in the Camp Nou next Thursday before the return game in Madrid 6 days later.

Spain left-back Jordi Alba is until now the only arrival from Valencia but more may follow.

"Training is the same as we had with Pep and the philosophy is the same, there won't be too many changes," he said.

"Those who think this league is only about two sides are wrong, there are always surprise teams, we have to keep up our own high standards and win what we could not win last season."

Carles Puyol is available for Sunday after a knee injury that kept him out of Euro 2012 and David Villa is almost back from the fractured tibia that saw him sit out most of last season, but he is not expected to be pushed into action immediately.

Madrid have also changed very little a team that brought to an end Guardiola's three consecutive titles with a record 100 points and 121 goals.

Ronaldo will be backed once again by Karim Benzema and Gonzalo Higuain to provide the firepower for Jose Mourinho's team.

Valencia, however, ended last season third for the third successive year and will provide a severe test in Madrid's opening defence of the title.

Forward Roberto Soldado, the highest-scoring Spaniard with 17 goals last season, should shake off a niggling injury in time.

Belgian goalkeeper Thibaud Courtois returned with damaged ribs from international duty and is a doubt, while international full-back Juan Francisco Torres -- "Juanfran" -- twisted a knee in Spain's game in Puerto Rico and is definitely out.

Athletic Bilbao's build-up to their home game with Betis has not been ideal after a week in which they have come close to losing two star players in Fernando Llorente and Javi Martinez.

First, forward Llorente announced his decision not to sign a contract extension before it was revealed Bayern Munich were willing to pay the 40 million euros ($49 million, £31 million) required to free Martinez from the Basque side.

Both players trained on their own on Thursday and if they are still at the club by the weekend it is unlikely they will feature.

Aritz Aduriz's return to Bilbao from Valencia will do little to appease home fans who will be sure to be vocal.

Comments
Topics mentioned in this article
Football Barcelona Lionel Messi Real Madrid Cristiano Ronaldo
Get the latest updates on ICC T20 Worldcup 2022 and CWG 2022 check out the Schedule, Live Score and Medals Tally. Like us on Facebook or follow us on Twitter for more sports updates. You can also download the NDTV Cricket app for Android or iOS.