Pirlo left the pitch for treatment after suffering a knock to his knee during a 1-0 win over Udinese. 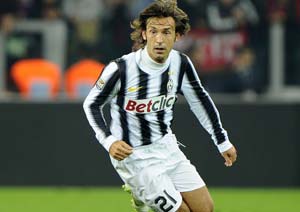 Juventus coach Antonio Conte admitted to fears over Andrea Pirlo after the veteran midfielder hobbled off during a 1-0 win over Udinese on Sunday.

Pirlo left the pitch for treatment after suffering a knock to his knee in the opening exchanges and despite returning to the pitch to play on, pain got the better of the Italy international.

Conte said: "We hope it's nothing serious for Andrea and that it's just a knock he has suffered.

"He's an important player for us, although I don't have to wait until he's injured to say that. I want to be optimistic, Andrea is a winner and I'm sure he will try to make himself available as soon as possible."

An injury-time header from Spain striker Fernando Llorente rescued the hosts at Juventus Stadium, where the champions' 12th win of the campaign sent them three points clear of Roma.