Juventus open up six-point lead in Serie A

Arturo Vidal and Giorgio Chiellini netted a goal each as Juventus beat Bologna 2-0. 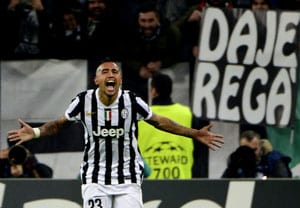 Arturo Vidal and Giorgio Chiellini struck in either half to hand Juventus a 2-0 away win at Bologna on Friday which gave the Serie A leaders a six-point lead over second-placed Roma.

Four days ahead of a crucial trip to Istanbul, where Juve need a point against Galatasaray to qualify for the last 16 of the Champions League, coach Antonio Conte left a host of regulars on the bench.

However their absences did not hinder the champions, who opened the scoring through Vidal on 12 minutes before Chiellini headed home at the death.

Juve have now gone seven Serie A games without losing or conceding a goal, and Chiellini told Sky Sport Italia: "We all played well against a very tough Bologna side... we have to continue this victory run.

"Now, our thoughts are on Istanbul and Galatasaray. It's like a final, a turning points in the season for us. We need the match of our lives."

Mauricio Isla and Federico Peluso were also deployed as wing-backs in place of Stephan Lichsteiner and Kwadwo Asamoah, while Paul Pogba took the injured Andrea Pirlo's role in the centre of midfield.

Despite the reshuffling, Juve had no trouble dictating play against a side that has only one home win so far this season and were sent crashing out of the Italian Cup at home by Serie B side Siena on Tuesday.

Juve should have had several goals by the interval but Quagliarella and Claudio Marchisio spurned early chances against impressive home 'keeper Gianluca Curci.

The visitors eventually found the net when Peluso's cross found Vidal unmarked and the Chilean had no trouble sending it over the onrushing Curci.

Quagliarella then sent an effort just wide under a challenge from Mikael Antonsson while, at the other end, Gianluigi Buffon produced two solid blocks to deny long-range efforts from Alessandro Diamanti, the first from a free-kick.

The Montenegrin had earlier come down hard under a challenge and was replaced by Llorente just before the break.

Bologna threatened briefly at the end of the half, when Vidal saw a shot go wide after Llorente's dribbling run left the Chilean with a clear shooting chance.

Curci really came into his own as Bologna suffered in the second half, the Italian blocking at Llorente's feet after he had been set up by Ogbonna and saving again two minutes later after Llorente spun on Peluso's short pass to the right of goal.

Conte replaced Peluso with Asamoah and, a minute later, the Ghanaian had the ball in the net, only to be ruled offside.

Tevez then replaced Quagliarella before Juve survived a scare when late substitute Jonathan Cristaldo pounced on Chiellini's poor clearance to fly past Ogbonna and send an angled drive just past the upright.

Bologna threatened again when Archimede Morleo got on the end of Diamanti's cross from the right to send a bouncing header a foot wide of Buffon's post.

On 85 minutes, Curci did well to deny Llorente again when he parried the striker's shot from close range.

But the 'keeper could do little when Chiellini got his head to a corner at the near post to send Curci sprawling into the net in the 89th minute.

Roma, second six points off the pace, are in action on Sunday but their potentially tricky clash with Fiorentina comes on the back of four consecutive draws.

Comments
Topics mentioned in this article
Football Genoa Napoli Lazio Juventus Stadium Chelsea Bologna Juventus Chievo Catania AC Milan Fiorentina Atalanta
Get the latest Cricket news, check out the India cricket schedule, Cricket live score . Like us on Facebook or follow us on Twitter for more sports updates. You can also download the NDTV Cricket app for Android or iOS.