Manchester City surrendered a 2-0 advantage to draw 2-2 with Sean Dyche's team on December 28 and have also dropped points against QPR, Everton and Hull, all of whom are in the bottom seven in the table. 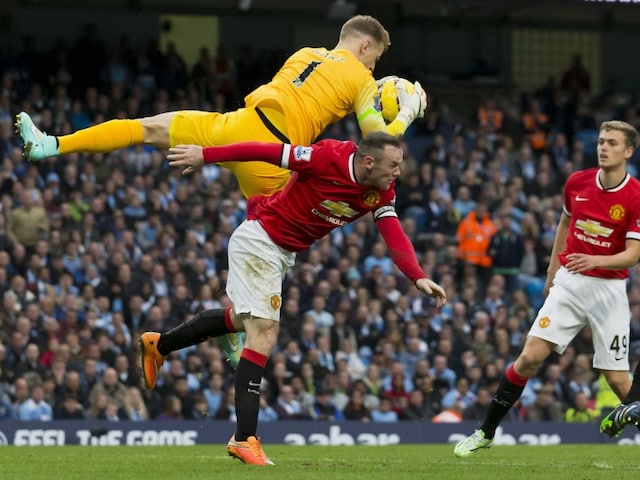 Joe Hart has warned Manchester City to learn the lessons of their past encounters with struggling Premier League clubs as they prepare to face Burnley at Turf Moor on Saturday.

City surrendered a 2-0 advantage to draw 2-2 with Sean Dyche's team on December 28 and have also dropped points against QPR, Everton and Hull, all of whom are in the bottom seven in the table.

Manuel Pellegrini's side beat Leicester 2-0 in their last outing on March 4, but were made to work hard by the lowly Foxes before James Milner scored in the 89th minute to seal the points.

"Last week, we played Leicester, who are bottom of the league and had to fight for a 2-0 - it will be the same at Burnley," City goalkeeper Hart said.

"That is just how it is in the Premier League, and as soon as you let that get to you, it will crush you."

The champions' missed opportunities have been exploited by Chelsea, who lead the league by five points, having played one game fewer.

Pellegrini is expected to have a full-strength squad to choose from, but the Chilean will be mindful of keeping his stars fresh for City's Champions League last 16 second leg in Barcelona on Wednesday.

City trail 2-1 from the first leg and David Silva, who was named City's player of the month for February, is likely to play a key role in shaping the club's hopes of progressing to the quarter-finals.

Team-mate Frank Lampard believes the Spaniard has the quality to grace any team.

"I've been fortunate enough to play alongside players like Gianfranco Zola, Arjen Robben and Eden Hazard among others and he's completely up there with the best," said former Chelsea midfielder Lampard.

"From the moment I arrived and started training with him in pre-season I could better appreciate his weight of pass, movement, and his touch and he could play in any team in the world.

"It's been a pleasure to play and train alongside him or even just to watch him. The way he holds himself, too, impresses me because he's one of the most humble top players I've ever come across - that's something I love because it's refreshing to see.

"To be at the top of your game, have all the medals he has and do what he does week in, week out and yet it's still like he's just coming in, doing his day job and going home."

The last time Burnley were in the Premier League, in 2009-10, they also drew at Eastlands.

But they were swamped 6-1 in the reverse meeting, conceding three goals in the opening seven minutes, as they headed for relegation.

The Lancashire club are in the bottom three again and, after failing to win in seven league games, manager Dyche is aware of the scale of the task facing his side.

"We know the power of these clubs. There's lots been made of the spending power but you've still got to spend it wisely and I think they have," he said.

"They have got some fantastic players. We experienced that once before and gave a good performance and I think overall on the day deserved a point.

"But we know that doesn't guarantee anything this time. They are a highly motivated group of players, still in the hunt for the league with a very experienced and fantastic manager. So obviously it's a big challenge once again."

Burnley have signed Norwegian international midfielder Fredrik Ulvestad, 22, as a free agent on a three-year deal, but the former Aalesunds FK player is not yet considered ready for first-team contention.

Comments
Topics mentioned in this article
Manchester City Joe Hart Football
Get the latest updates on IPL 2020, check out the IPL Schedule for 2020 and Indian Premier League (IPL) Cricket live score . Like us on Facebook or follow us on Twitter for more sports updates. You can also download the NDTV Cricket app for Android or iOS.