Japan battle back to hold Netherlands

The meeting of two nations already assured of their place at the World Cup finals in Brazil was an open affair at the Cristal Arena, with the Dutch on top early on. 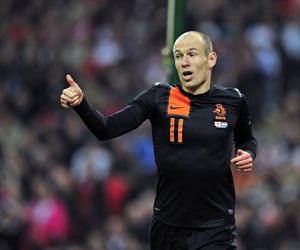 Japan produced an excellent second-half performance to come from two goals down and draw 2-2 with the Netherlands in Genk, Belgium on Saturday.

The meeting of two nations already assured of their place at the World Cup finals in Brazil was an open affair at the Cristal Arena, with the Dutch on top early on.

They opened the scoring from their first chance in the 13th minute when Rafael Van der Vaart of Hamburg lobbed Japanese goalkeeper Shusaku Nishikawa.

Van der Vaart then set up Bayern Munich winger Arjen Robben to increase the Oranje's lead in the 39th minute, but Japan reduced the arrears just before the interval through Yuya Osako, a striker who has been in prolific form at club level recently.

Keisuke Honda then finished off a flowing move to level the scores on the hour mark and Japan even had chances to win the game late on against a Dutch side deprived of the injured Robin van Persie and also missing Wesley Sneijder.

"The first half was very good but after that we were unable to get forward. It is a problem that we will need to analyse and solve in our coming games," said Dutch coach Louis van Gaal, whose side face Colombia in another friendly on Tuesday in Amsterdam.

Comments
Topics mentioned in this article
Football France Portugal Netherlands Mexico Japan Canada Belarus
Get the latest Cricket news, check out the India cricket schedule, Cricket live score . Like us on Facebook or follow us on Twitter for more sports updates. You can also download the NDTV Cricket app for Android or iOS.