England midfielder James Milner, who joined on a free transfer last month from Manchester City, was on target in the 67th minute for the second time in four days for Liverpool in Australia. 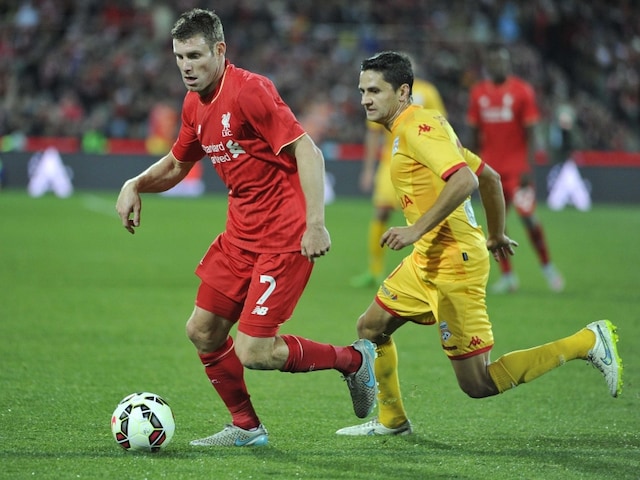 England midfielder Milner, who joined on a free transfer last month from Manchester City, was on target in the 67th minute for the second time in four days for Liverpool in Australia.

Milner, capped 53 times by his country, scored Liverpool's winner in a 2-1 victory over Brisbane Roar on Friday.

Fellow new recruit Danny Ings sealed the victory with Liverpool's second goal in the 88th minute to cap a strong all-round performance by the Merseyside giants before 53,000 at the Adelaide Oval.

Adelaide did not mount a genuine attack until 25 minutes into the game. They can credit two super low saves by goalkeeper Eugene Galekovic for keeping the game scoreless at halftime.

Galekovic produced another top-shelf stop in the 59th minute with a spectacular mid-air parry to deflect an Adam Lallana strike.

But eight minutes later Galekovic was finally beaten when Milner scored after a sweet passing movement.

Milner slid onto the end of a curling Jordon Ibe cross to poke the ball in with his right foot, although replays suggested he may have been offside.

Ings made it safe for Liverpool when put through by a Nathaniel Clyne pass. The former Burnley forward got a touch around the flailing Galekovic to roll the ball into the net.

Comments
Topics mentioned in this article
James Milner Liverpool Football
Get the latest Cricket news, check out the India cricket schedule, Cricket live score . Like us on Facebook or follow us on Twitter for more sports updates. You can also download the NDTV Cricket app for Android or iOS.