Ivan Rakitic came off the bench to inspire FC Barcelona to a 2-0 win over BATE. 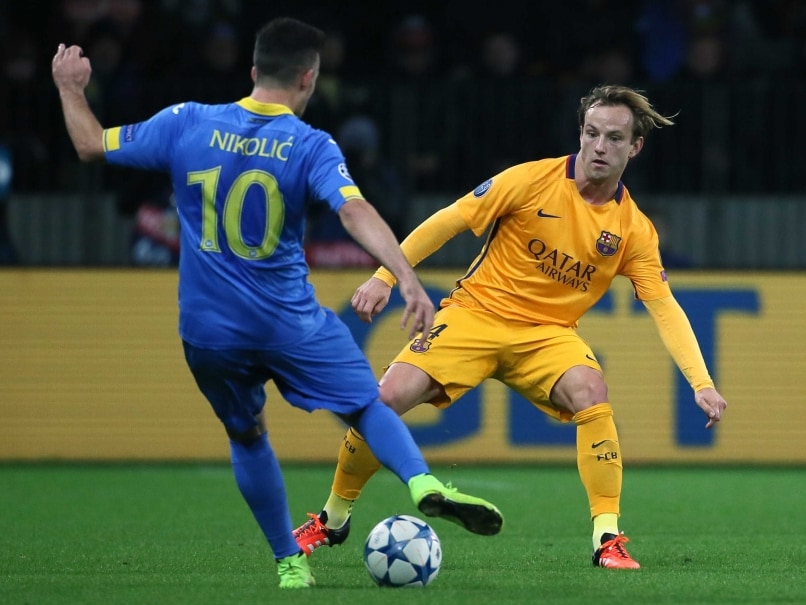 European champions Barcelona edged closer to sealing their place in the last 16 of the Champions League as Ivan Rakitic's double handed them a comfortable 2-0 win away at BATE Borisov. (Click her for latest Football stories)

Rakitic had started on the bench, but was pressed into action by a first-half injury to Sergi Roberto and finally opened the scoring after a frustrating opening period for the visitors soon after half-time.

Neymar then teed up the Croatian for his second of the evening as Barca solidified their position atop Group E with seven points from their first three games.

An incredible 4-4 draw between Bayer Leverkusen and Roma in the other game in the group on Tuesday leaves Barca three points ahead of the Germans with BATE still a point ahead of Roma in third.

Neymar has taken the lead role since Lionel Messi was sidelined by a knee ligament injury three weeks ago and he nearly added to his four goals against Rayo Vallecano on Saturday within three minutes but his shot was too close to Sergei Chernik.

Munir El Haddadi was standing in for Messi on the right side of the Barca attack and the Spanish under-21 international should have opened the scoring from a well-worked corner only to see his effort brilliantly repelled by Chernik.

The visitors suffered another injury blow on 17 minutes when Roberto hobbled off, but his replacement Rakitic was to have a telling impact.

Sergio Busquets was unfortunate to see a shot fly across goal and beyond the far post before Rakitic should have done better when unmarked from Dani Alves's cross as the recently crowned Belarusian champions held out until half-time.

However, it took Barca just three minutes to open the scoring after the break as Neymar teed up Rakitic to fire his first goal of the season into the top corner.

Neymar's search for the goal that his performance deserved continued as he sent a sweetly struck volley inches wide moments later.

Yet he had an important part to play in the second goal as Rakitic received another pass from the Brazilian before coolly lifting the ball over the advancing Chernik.

Comments
Topics mentioned in this article
Ivan Rakitic Barcelona BATE Football
Get the latest updates on ICC T20 Worldcup 2022, check out the Schedule and Live Score. Like us on Facebook or follow us on Twitter for more sports updates. You can also download the NDTV Cricket app for Android or iOS.