Inter Milan maintained their pursuit of Serie A leaders Juventus with a 2-0 win over Catania as Fiorentina lost ground after being held to a 1-1 draw at Chievo on Sunday. 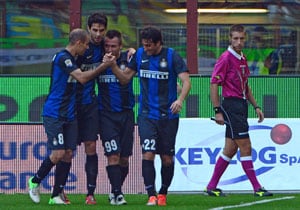 Inter Milan maintained their pursuit of Serie A leaders Juventus with a 2-0 win over Catania as Fiorentina lost ground after being held to a 1-1 draw at Chievo on Sunday.

Inter's fourth win on the trot came thanks to goals from Antonio Cassano and Argentina international Rodrgio Palacio and leaves Andrea Stramaccioni's side in fourth place only four points behind leaders Juventus.

Juventus, now on 22 points, remain the only unbeaten team in the league.

Lazio, meanwhile, maintained their early season charge with a 3-2 win over embattled AC Milan on Saturday that left the Rome-based side in third place four points behind Juve.

AC Milan's fifth defeat in eight games in unlikley to lead to the sacking of coach Massimiliano Allegri, according to Milan officials mindful of the fact he lost the spine of his team during a turbulent summer transfer period.

However the club have reacted to Saturday's reverse - at one point Lazio were leading 3-0 until goals from Nigel De Jong and Stephan El Shaarawy reduced arrears - by ordering the players to a week-long training camp.

Milan's squad will meet at Montanello outside Milan for training on Monday before flying out to Spain Tuesday for their Champions League Group C fixture against Malaga a day later.

They will then return to Montanello to prepare for Saturday's visit of Genoa, a match which Milan, sixth from bottom on seven points, must win if they are to consider getting back into the title race.

San Siro neightbours Inter have no such problems so far.

Fresh from a 1-0 victory in the Milan derby last week, Stramaccioni sent out his "dream trio", as he likes to call Diego Milito, Palacio and Cassano, for their away fixture against Catania.

In 30 previous encounters Catania had registered only five wins to 21 for their hosts.

And win number 22 looked on the cards when Cassano, who has recently been left on the sidelines by Italy coach Cesare Prandelli, headed the ball between the legs of 'keeper Mariano Andujar to give Inter a 28th minute lead.

Although Milito has yet to score this month, the Argentine initiated the move which led to Cassano's goal and provided the assist for Palacio to open his Inter account in the 85th minute.

Fiorentina spurned the chance to keep tighter tabs on Inter when they had to settle for a share of the points in Chievo.

French striker Cyril Thereau hit a low angled shot past Emiliano Viviano in the Fiorentina net in the 17th minute to give his Verona-based side the lead.

But La Viola levelled only a minute later when Argentine defender Guillermo Rodriguez pounced to beat Stefano Sorrentino after a corner.

Fiorentina sit fifth on 12 points but could be overtaken later Sunday if Roma win away to Genoa.

Comments
Topics mentioned in this article
Football Inter Milan Rodrigo Palacio Juventus Antonio Cassano
Get the latest updates on IPL 2021, check out the IPL 2021 Schedule and Indian Premier League Live Score . Like us on Facebook or follow us on Twitter for more sports updates. You can also download the NDTV Cricket app for Android or iOS.