Going down to a lower-ranked team has its share of embarrassment. Being outclassed by a team ranked 33 places lower is downright humiliating. Just ask Indian football fans who saw their national team surrender to Guam - an island in Micronesia - 2-1. 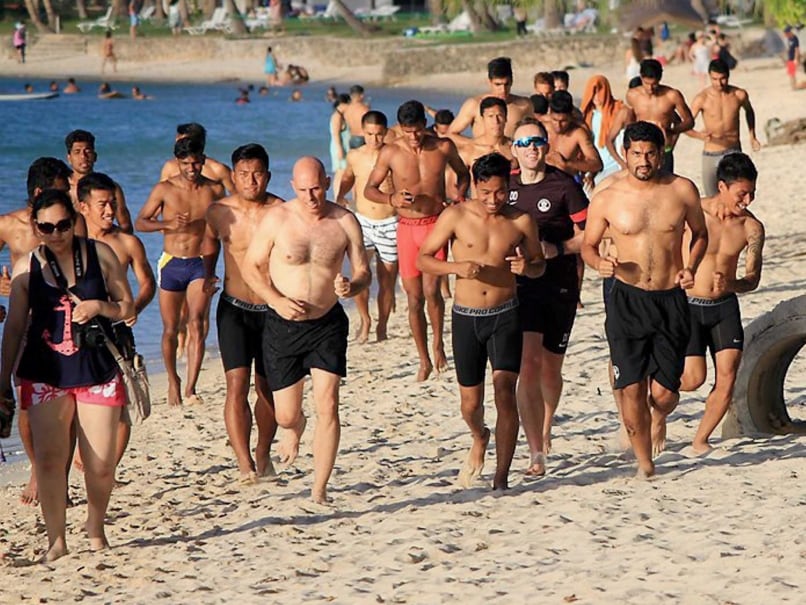 File photo of the Indian football team during a training session in Guam.© PTI

An incorporated territory of the United States, the island of Guam is situated in the western part of the Pacific Ocean - far from the attention of the football world. On Tuesday morning though, the tiny region made international headlines by dismantling India 2-1 in a FIFA 2018 World Cup qualifier match. After all, it isn't often that an area inhabited by 165,000 people can topple another boasting of 1.25 billion souls. (Match report)

Ranked 174 in the world, Guam displayed spirited football against a rather clueless Indian team which is 141 in FIFA rankings. The team smashed two shots - in the 35th minute and 64th minute - into the Indian goal and kept the scoreline intact up until injury time when captain Sunil Chettri salvaged microscopic pride by netting his 50th for the national team.

Guam tackled better, passed better and attacked better on flanks . Little wonder then that the final scoreline of 2-1 against India - a side looking to open its account in Group D - will keep Indian fans fuming for some time to come.

"When is the ISL starting? Indian Football needs a rebirth! We lost to Guam...I don't even know where on Earth is that!!!" wrote Jaideep Chakrabarty, a sports journalist based in New Delhi, on his Facebook page minutes after the final whistle.

Guam has now overtaken Maldives to become the least populated country to ever defeat India in football. Congratulations Constantine!

World Cup Qualifiers are over for us. Now it's all a prep for Asian Cupqualifiers 3rd round. #INDvGUA #BackTheBlue #indianfootball #WCQ2018

Guam's spectacular show in front of home fans though wasn't something new for the minnows of world football. The team had previously defeated Turkmenistan (1-0) while the Indians had lost to Oman (1-2).

India coach Stephen Constantine had already warned of the threat at hand.

"We are not in a position to look at the FIFA Rankings. Guam having won their last match against Turkmenistan is going to be encouraged, stay motivated and be ready to play," Constantine had said before the match. Very few though expected the 'encouragement' and the 'motivation' to hurt India this bad.

To bounce back from the defeat - and the ensuing humiliation - would be a tough proposition for Chettri and his men. As for Guam - an island with almost as many inhabitants as Shimla, the celebrations will continue well into the tropical night of the enchanted Pacifics. World rankings can take a break today.