Playing in front of a hostile crowd, India needed just a draw but they played badly and paid heavily for missing the chances that came their way. 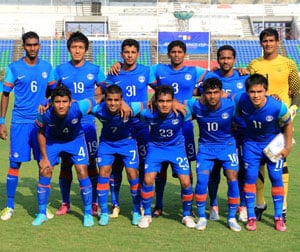 India's qualifying hopes for the AFC Challenge Cup 2014 finals suffered a huge set-back on Wednesday as they went down 0-1 to hosts Myanmar in their last qualifying match in Group A at the Yangon Youth Training Centre in Yangon.

A 75th-minute strike by substitute Soe Min Oo shocked India as Myanmar booked a ticket for the final round to be held in the Maldives. Myanmar will be joined by other four group toppers and two best runners-up alongside hosts Maldives in the 2014 tournament proper.

Myanmar finished on top with seven points and India second with six. However, all is not lost for India, who were champions in 2008. They will have to wait for other groups to be completed to know their fate. All the group matches will be finished by March 26.

Playing in front of a hostile crowd, India needed just a draw but they played badly and paid heavily for missing the chances that came their way.

In the very next minute, Mehtab Hossain's through set up Jewel Raja Shaikh on the right. Jewel entered the box with Sunil preferring to do the dummy. Much to the relief of the crowd, Jewel preferred to find Sunil rather than going himself and both the teams went into the resumption goalless.

These apart, there were series of corners earned in the first half along with a number of throw-ins around the Myanmar box, all of which were floated in by Raju Gaikwad. The closest India came was in the 35th minute when his throw venomously dipped and beat all even as Sunil Chhetri tried to flick it in.

Myanmar were quick in their counter-attacks. Gurjinder Kumar was yellow carded for tripping Kyi Lin from behind in the 17th minute. Lin was initiating a counter attack and had with a deft turn, got past Gurjinder.

Post-resumption, Myanmar were off the blocks faster. The first positive chance came in the 51st minute but Subrata Paul, till then not tested in the match, kept at bay a Kyi Lin low shot.

The nippy Lin interchanged all throughout and in the very next minute almost laid the platform for Myanmar to take the lead but Kaw Zayar Win failed to tap in Lin's through from close. They were tense moments in the Indian camp and, obviously, the decibel levels rose.

The Indians tried to regroup. Intercepting a counter-attack, Chhetri laid it for Jewel in the box but the latter instead tried to find Chhetri instead of pulling the trigger.

In between, Denzil Franco was yellow-carded for pushing David Htan on the far right and then, Gouramangi Singh was yellow carded for tripping substitute Soe Min Oo just outside the box. But Myanmar failed to capitalise.

Instead, Jewel almost put India in the lead. He latched on to the second ball off a Raju throw but his prompt right-footer hit the post and bounced back.

Myanmar finally broke the deadlock in the 75th minute when Soe found the back of the net after coming as a substitute in the 50th minute for midfielder Pai Soe.

In the 80th minute, Arata followed a Raju throw-in and tapped in from close but only for defender Zaw Min to make a goalline save. Myanmar managed to hold on till the end.

Myanmar suffered a shock 1-1 draw against Chinese Taipei in the second match after beginning promisingly with 5-0 win over Guam.

Having won their two matches in the trot, India could have sealed an automatic berth for the finals even with a draw but Soe's strike left them wait for other groups to finish.

Comments
Topics mentioned in this article
Football India Cricket Team
Get the latest updates on T20 World Cup, check out the T20 World Cup Schedule and Live Score . Like us on Facebook or follow us on Twitter for more sports updates. You can also download the NDTV Cricket app for Android or iOS.