Ibrahimovic in doubt for Brazil friendly

Sweden captain Zlatan Ibrahimovic is doubtful for the midweek international friendly against Brazil because of a bruised foot, the Swedish Football Federation (SvFF) said on Tuesday. 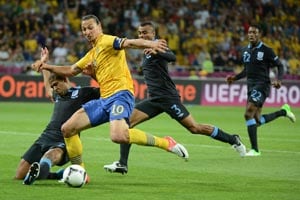 Sweden captain Zlatan Ibrahimovic is doubtful for the midweek international friendly against Brazil because of a bruised foot, the Swedish Football Federation (SvFF) said on Tuesday.

The Paris Saint Germain striker "received a kick in the right foot" during Saturday's Ligue 1 opener against Lorient.

"It's nothing serious but he's suffering from swelling and will undergo tests to see if he is fit to train on Tuesday," the SvFF added.

Ihrahimovic said however he was hopeful of lining out against Brazil.

"It's something big to play against them, a good experience for us before the World Cup qualifiers begin," he said.

"(Brazil's) Thiago Silva, my teammate in Paris and before that in Milan, is the top defender in the world."

Ibrahimovic, 31, has scored 33 goals in 80 matches for Sweden and has not missed an international game since a friendly against Qatar last January.

Meanwhile, Pele and other members of Brazil's 1958 World Cup-winning team are being invited to Stockholm to commemorate their victory against the hosts.

The match on Wednesday will be the last to be staged at the venue before it is demolished, to be replaced by a new 50,000-seat stadium nearby.

The Rasunda Stadium was the centrepiece of the 1958 World Cup finals, and hosted the final, which Brazil won 5-2 against the hosts.

Pele, aged 17 at the time, netted a brace in that game.

Comments
Topics mentioned in this article
Football Zlatan Ibrahimovic Brazil Sweden
Get the latest updates on ICC T20 Worldcup 2022 and CWG 2022 check out the Schedule, Live Score and Medals Tally. Like us on Facebook or follow us on Twitter for more sports updates. You can also download the NDTV Cricket app for Android or iOS.