AC Milan vice-president Adriano Galliani has admitted that the absence of star forward Zlatan Ibrahimovic for Saturday's derby against Inter Milan is a huge blow. 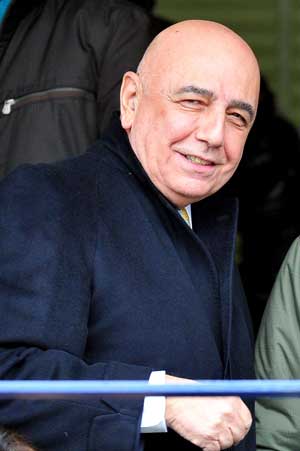 AC Milan vice-president Adriano Galliani has admitted that the absence of star forward Zlatan Ibrahimovic for Saturday's derby against Inter Milan is a huge blow.

The Sweden forward is serving the second of a two-match ban imposed for striking Bari's Marco Rossi in the ribs.

He was originally banned for the regulation three games for violent conduct but has his sentence was surprisingly reduced on appeal.

Milan suffered a shock 1-0 defeat at Palermo in the one game he missed so far and Galliani admitted they will feel his absence on Saturday, even though he insisted the derby -- between the top two in Serie A -- won't be decisive in the title race.

"You can still lose the derby and win the league, and vice-versa. It would be decisive if it was the last day of the season and the teams were separated by no more than three points," he said.

"Ibrahimovic has been crucial in every game, both in attack and in defence.

"I don't know if you (journalists) have noticed what he does when defending corners and free-kicks.

"He is an ultra-vital player, it's a shame he won't be playing in the derby but there will be seven more (matches)."

Milan lead Inter by two points with eight matches left to play and Napoli just a point behind the nerazzurri in third in one of the tightest championship finishes in years.

Even outsiders Udinese are only six points off top and they have been in the best form of the top four since the turn of the year.

Even so, this weekend at least, the majority of attention will be focussed on the San Siro and Galliani admits this is the most eagerly anticipated derby in years.

"There's only a thread of extra tension with respect to other games," he said.

"Of course it's been several years since both teams were challenging for the title but the two Champions League games in 2003 were the ones that got to me the most."

Back then Milan eased through on away goals and went on to beat Juventus in the final on penalties.

Comments
Topics mentioned in this article
Football Zlatan Ibrahimovic Javier Pastore AC Milan
Get the latest updates on ICC T20 Worldcup 2022 and CWG 2022 check out the Schedule, Live Score and Medals Tally. Like us on Facebook or follow us on Twitter for more sports updates. You can also download the NDTV Cricket app for Android or iOS.