I never gave up hope of regaining armband: Terry

Chelsea skipper John Terry revealed on Monday he had never given up hope that he would one day be restored as England captain. 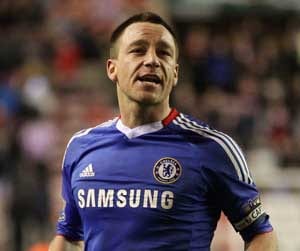 Chelsea skipper John Terry revealed on Monday he had never given up hope that he would one day be restored as England captain.

Terry was stripped of the armband 13 months ago following revelations that he had an alleged affair with a former girlfriend of England team-mate Wayne Bridge.

But the defender was at the weekend confirmed as captain of his country for a third time and is set to lead the team against Wales on Saturday.

"I've always done whatever the manager needs of me to make sure we win," Terry told The Sun newspaper. "I moved on very quickly from the decision about losing the captaincy and I've never fallen out with the manager.

"But I've never given up hope that I will captain England again."

Terry revealed boss Fabio Capello has been impressed with his reaction to being axed as skipper, and insists he has always maintained respect for the Italian.

"When the manager told me in that meeting at Wembley that I was losing the job I accepted and respected his decision - even though I did not necessarily agree with it - shook his hand and his assistant Franco Baldini's hand and told them I'd always give 100 percent," Terry added.

"The manager said he really appreciated that and hoped that would be the case."

Comments
Topics mentioned in this article
Football John Terry
Get the latest updates on ICC T20 Worldcup 2022 and CWG 2022 check out the Schedule, Live Score and Medals Tally. Like us on Facebook or follow us on Twitter for more sports updates. You can also download the NDTV Cricket app for Android or iOS.