Promising striker Jobby Justin starred for the red and gold brigade with a goal in the 75th minute. 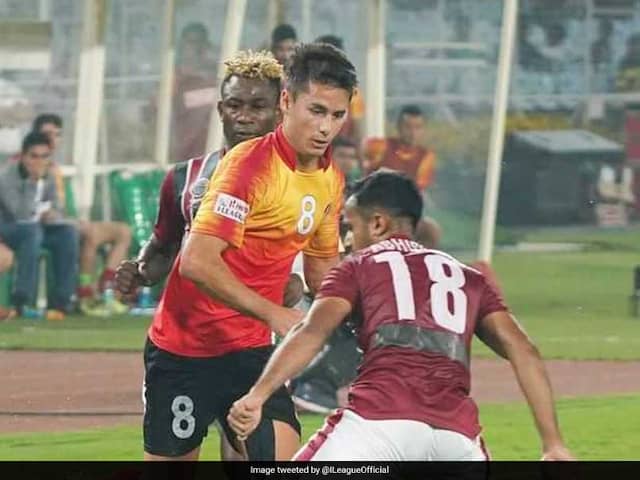 East Bengal put themselves back in title contention after defeating arch-rivals Mohun Bagan 2-0 in the second I-League derby at the packed Yuba Bharati Krirangan in Kolkata on Sunday. Promising striker Jobby Justin starred for the red and gold brigade with a goal in the 75th minute and an assist after Spanish forward Jaime Colado (35th) had opened the scoring for the 'visitors'. The defeat all but ended Mohun Bagan's slim title aspirations as they succumbed to their first defeat under new coach Khalid Jamil. In the first leg, East Bengal had edged past Sankarlal Chakraborty's Mohun Bagan 3-2.

This is the first time East Bengal have beaten Mohun Bagan twice in the same season in the last 15 years. Courtesy the result, East Bengal (25 points) trimmed the gap to five points on league leaders Chennai City FC (30 points) while Mohun Bagan remained on 21 points from 14 matches.

East Bengal, placed fourth, and Chennai have played 13 matches each so far with the latter taking on third-placed Real Kashmir FC in a crunch tie on Monday. Despite the presence of skipper Sony Norde in attack, Mohun Bagan looked lacklustre especially at the back from the start.

East Bengal could have taken the lead as early as in the 8th minute but Jobby Justin failed to connect after Laldanmawia Ralte set him up with a low cross inside the box. Mohun Bagan took time to get going and could have conceded a penalty when goalkeeper Shilton Paul went for a two-footed challenge on Justin. East Bengal players appealed for a penalty but referee CR Srikrisna waved play on.

The 'hosts' first real chance came at the half hour mark when Haitian star Sony Norde's close range effort was blocked by Lalram Chullova. Five minutes later, East Bengal took the lead as Justin beat Kingsley Eze on the right flank to keep a low ball inside the box for Jaime. The Spaniard dribbled past Gurjinder to slot the ball home.

Mohun Bagan went into the break with a lot to work on as East Bengal were the far better side. Mohun Bagan started as a rejuvenated unit after the break and East Bengal's Colado was lucky to be on the pitch after he dragged down Dipanda Dicka on the floor following the striker's tussle with Johnny Acosta inside the box.

There was more drama later when Norde floated a corner for Eze, who hit the crossbar with the ball then taking a touch off Darren Caldeira, who was in an off-side position. The Khalid Jamil-coached side vehemently protested the decision as their premature celebrations were cut short.

East Bengal then doubled their tally through brilliant Justin, who nodded in a Lalrindika Ralte corner at the far post to send the crowd into ruptures.