'Hungry' Bayern Munich out to see off Basel

Bayern Munich host FC Basel on Tuesday needing to overturn a 1-0 deficit from their Champions League round of 16 first-leg match, while the Swiss side is looking to claim another major scalp. 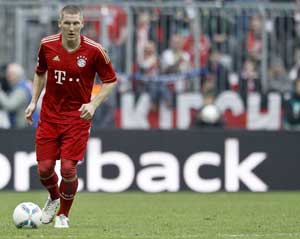 Bayern Munich host FC Basel on Tuesday needing to overturn a 1-0 deficit from their Champions League round of 16 first-leg match, while the Swiss side is looking to claim another major scalp.

Basel ended Manchester United's involvement in this season's campaign when they beat Sir Alex Ferguson's side in Switzerland last December, then proved it was no fluke with victory over Bayern at St Jakob Park stadium three weeks ago.

Although Bayern have a 100 percent home record in three games against Swiss opposition in the Champions League, Basel bring a deserved 1-0 aggregate lead to Munich's Allianz Arena after Valentin Stocker's 86th-minute winner.

Having won only five of their 10 matches since Christmas, Bayern enjoyed a confidence-boosting 7-1 hammering of Hoffenheim on Saturday in the Bundesliga, with Germany striker Mario Gomez netting a hat-trick in the rout.

"That will give us a boost. I am confident the squad has that hunger again," said Bayern coach Jupp Heynckes. "That was important for Tuesday."

Make no mistake: Bayern's season will be deemed a failure by their bosses unless they reach the quarter-finals, especially with Munich to host the final on May 19, and defeat on Tuesday could have profound consequences.

"Basel is a very important game for the way the rest of the season will run. We have to do that again against Basel," Munich president Uli Hoeness told German television channel ZDF after the Hoffenheim win.

While Bayern may have got their swagger back following last weekend's 2-0 defeat at Bayer Leverkusen, Basel, under ex-Bayern youth coach Heiko Vogel, are currently dominating Swiss football.

They arrive in Munich on the back of a morale-boosting win after a 2-0 victory at Grasshoppers Zurich over the weekend that put them 12 points clear at the top of the Swiss Super league.

Basel were last beaten in the Swiss league in August and their opening goal in Zurich was scored by future Bayern midfielder Xherdan Shaqiri, who will come to Munich at the end of the summer.

Bayern have plenty of experience and are appearing at this stage of the competition for the fourth consecutive campaign, while Basel are in the last 16 of the Champions League for only the second time in their history.

Bayern Munich stars Arjen Robben, Mario Gomez and Jerome Boateng are all nursing knocks, but are expected to play.

Gomez, who netted his 11th hat-trick for the club in the Bundesliga against Hoffenheim, came off after 57 minutes with a cut above his ankle and Robben needed prolonged treatment after scoring twice, but completed the 90 minutes.

Defender Boateng came off in the second half after straining a leg muscle.

Bayern were buoyed, however, by the return of Germany star Bastian Schweinsteiger for the final 20 minutes against Hoffenheim, 31 days after he tore ankle ligaments.

"I am glad that I got some time on the pitch, I felt good," said Schweinsteiger.

Bayern's midfield has lacked authority and purpose without their key playmaker and vice captain.

"For me, it is very important that he is back again," said Heynckes.

Comments
Topics mentioned in this article
Football Mario Gomez Wayne Rooney FC Basel Manchester United Xherdan Shaqiri
Get the latest Cricket news, check out the India cricket schedule, Cricket live score . Like us on Facebook or follow us on Twitter for more sports updates. You can also download the NDTV Cricket app for Android or iOS.