President of the Greek Republic Karolos Papoulias on Tuesday called for an end to violence at football matches in the country which he said is "shameful". 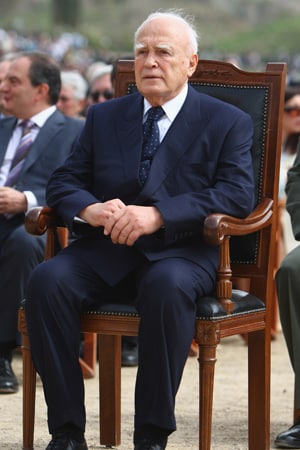 President of the Greek Republic Karolos Papoulias on Tuesday called for an end to violence at football matches in the country which he said is "shameful".

During a meeting with Greek football federation president Sophocles Pilavios, Papoulias called for "an end to this misery" and for "work to be done and not just decisions."

Pilavios delivered to Papoulias a dossier with proposals from the federation for tackling the violence.

"I met with Mr. Papoulias to inform him about what is happening and he is worried and angry about the violence at the football matches," Pilavios said.

Pilavios has called for harsher penalties for those found guilty of football-related violence, and wants the Greek state to help by reforming current legislation.

Greece's history of football-related violence was on display last week in a match involving bitter rivals Olympiakos and Panathinaikos, which Olympiakos won 2-1 thanks to a controversial late goal.

After the match Olympiakos fans kicked and shoved Panathinaikos players as they left the pitch.