Germany's stars shouldered the blame in the wake of their shock 2-1 defeat here to Australia as the Socceroos claimed their maiden win over the hosts. 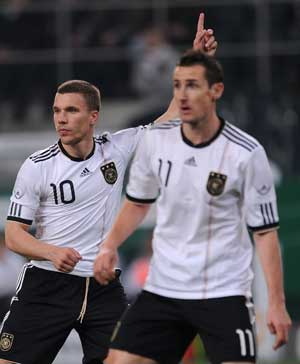 Germany's stars shouldered the blame in the wake of their shock 2-1 defeat here to Australia as the Socceroos claimed their maiden win over the hosts.

After forward Mario Gomez had put the hosts ahead with a first-half strike, two goals in two stunning second-half minutes by Blackpool midfielder David Carney and a penalty from Dynamo Moscow's Luke Wilkshire floored the Germans.

Tuesday's victory was Australia's first win over Germany at the fourth attempt and was revenge for the Socceroos' humiliating 4-0 defeat at the hands of the Germans at last year's World Cup.

Since finishing third in South Africa, Germany have failed to win any of their last four friendlies, but are undefeated and five points clear at the top of their Euro 2012 qualifying group.

Germany coach Joachim Loew was punished for naming an inexperienced line-up which never recovered after the guests stunned their hosts by taking the lead and then refused to buckle when the Germans pressurised for an equaliser.

"It was a question of attitude," admitted veteran striker Miroslav Klose, who came off the bench in the second-half with his side behind.

"You can prepare very well, but then you play a bit loosely come match day and pay the price.

"That sort of thing shouldn't happen."

The 30,000-strong crowd, mainly Germans with pockets of die-hard Australian fans, vented their frustrations with loud boos and whistles in the second-half when the home side fell behind.

Defender Arne Friedrich, another survivor from the side which won so convincingly at the World Cup last June, said the team suffered from their inexperience.

"We had a lot of changes, but that is no excuse," said the Wolfsburg star.

"We didn't pay attention for a few minutes and were punished.

"The coach can't have failed to notice what worked and what didn't, so these type of matches are necessary (to experiment)."

Goal-scorer Mario Gomez blamed the fans for his poor performance, who booed and whistled their team in Moenchengladbach, just as they did against Kazakhstan on Saturday despite the 4-0 win in Kaiserslautern.

"I wasn't able to concentrate fully," admitted Bayern Munich star Gomez, who with 19 goals, is the Bundesliga's top-scorer.

"Normally, my biggest competition for a place in the team is Miroslav, but at the moment, some of the fans are not making life easy."

Mainz striker Andre Schuerrle, who was winning only his second cap and was one of several who struggled, admitted the team lost their shape after falling behind.

"A lot of things didn't work, because we weren't organised enough," said the 20-year-old.

"We then let in the two stupid goals and we threw the game away."

"You have to understand the whistles, it is pretty expensive to watch a football match these days," he said.

"It's a few hundred euros to bring a family here and we didn't perform."

Comments
Topics mentioned in this article
Football Australia Cricket Team Australia Germany
Get the latest updates on ICC T20 Worldcup 2022 and CWG 2022 check out the Schedule, Live Score and Medals Tally. Like us on Facebook or follow us on Twitter for more sports updates. You can also download the NDTV Cricket app for Android or iOS.