Germany's international friendly against Finland in Borussia Moenchengladbach, which is doubling as Bastian Schweinsteiger's farewell on his 121st appearance, is not expected to sell-out 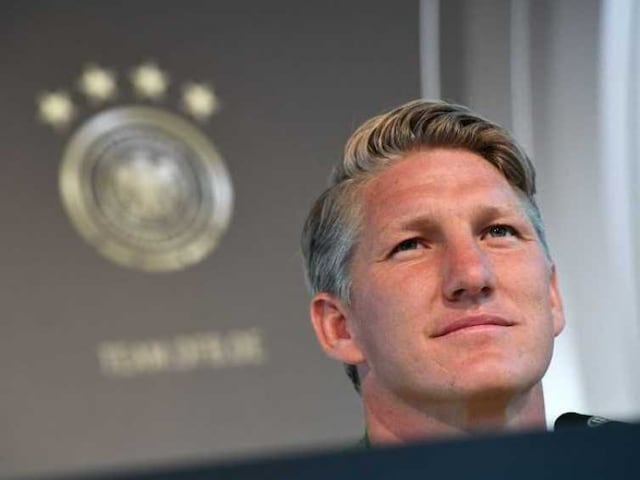 Bastian Schweinsteiger attends a press conference ahead of his farewell match for German football team.© AFP

Bastian Schweinsteiger is going, but not many fans are set to come to his farewell Germany appearance when the exiled Manchester United midfielder takes his bow in Wednesday's home friendly.

The international against Finland in Borussia Moenchengladbach, which is doubling as Schweinsteiger's farewell on his 121st appearance, is not expected to sell-out.

Less than half of the 43,000 tickets available had been sold by Monday with Schweinsteiger set to bow out after more than 12 years in the famous white shirt.

"It's a bit of a pity for Bastian, if the stadium isn't sold out," admitted Germany coach Joachim Loew.

"It's a bit unfortunate: there were the European championships, the Olympics and the Bundesliga has now begun," said Germany's head coach.

"On top of that, the kick-off time is quite late and the pupils are back in school, but I hope that a few more fans will come."

Schweinsteiger has said he has no plans to leave United despite new coach Jose Mourinho having banished him to the Under-23 team and insisted the soon-to-be ex-Germany captain is not in his plans.

Wednesday's friendly international is Schweinsteiger's chance to show Mourinho what he has been missing.

Loew has said he will only name Schweinsteiger's replacement as Germany captain after the Finland international.

Bayern Munich trio Manuel Neuer, who was skipper for five of their six Euro 2016 matches, Jerome Boateng and Thomas Mueller are all vying for the armband with Neuer as the favourite.

Loew says now is the right time to retire for Schweinsteiger and Lukas Podolski, who both made their debuts for Germany against Hungary in 2004 and have decided to retire in the wake of the European championships.

"For both, it was a very good time. Both have shaped the national team and in winning the World Cup, they have won the top title," said Loew.

"For both of them, it was the right decision to focus on their club teams and that was absolutely fine by me."

Comments
Topics mentioned in this article
Germany Manchester United Bayern Munchen Bastian Schweinsteiger Lukas Podolski Football
Get the latest Cricket news, check out the India cricket schedule, Cricket live score . Like us on Facebook or follow us on Twitter for more sports updates. You can also download the NDTV Cricket app for Android or iOS.