Madrid sports daily Marca published the story claiming that the problem had been identified when Gareth Bale underwent his medical with the club and that the player may need to undergo surgery. 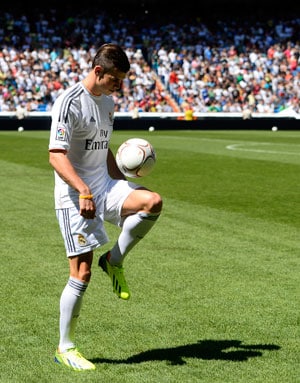 Real Madrid strongly denied a report in Spain on Saturday that world record signing Gareth Bale has a slipped disc.

Madrid sports daily Marca published the story claiming that the problem had been identified when the 24-year-old Welshman underwent his medical with the club and that the player may need to undergo surgery.

The club flatly denied those claims and although they admitted that Bale does have a slight disc protrusion, the condition will not affect him from playing.

"The information published, claiming that the player has a slipped disc on the L5-S1 vertebrae and a bulge on two others, is completely false," said a statement on the club's website.

"The player Gareth Bale has a small chronic disc bulge, which is extremely common among football players and by no means prevents him from carrying out his professional activity normally."

Bale has only been involved in three games for Madrid since sealing his move from Tottenham Hotspur at the start of September due to a series of niggling muscular injuries.

Those problems have been put down to his lack of a proper pre-season as he trained very little with Spurs as his protracted move dragged on.

Bale has stayed in the Spanish capital over the past week rather than representing Wales in their final two World Cup qualifiers to undergo a specific training programme to get him up to speed.

And it is hoped he will make his return against Malaga at the Santiago Bernabeu next Saturday ahead of crucial matches for Carlo Ancelotti's men against Juventus and Barcelona later this month.

Comments
Topics mentioned in this article
Football Real Madrid Gareth Bale
Get the latest updates on ICC T20 Worldcup 2022 and CWG 2022 check out the Schedule, Live Score and Medals Tally. Like us on Facebook or follow us on Twitter for more sports updates. You can also download the NDTV Cricket app for Android or iOS.