Real didn't put any specific time on how long they expected Gareth Bale to be sidelined, merely adding that his return would depend upon his recovery in the next few days. 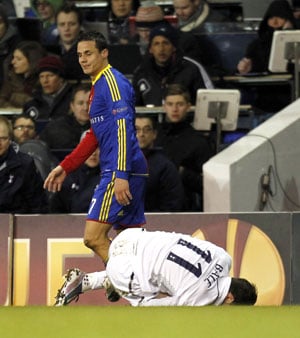 Real Madrid midfielder Gareth Bale has been sidelined with a thigh strain for the second time in a matter of weeks, the club confirmed on Wednesday.

Bale had already been left out of Real coach Carlo Ancelotti's 21-man squad for their Champions League encounter with FC Copenhagen at the Santiago Bernabeu after he was unable to train on Tuesday.

"After tests carried out today on Gareth Bale a muscle strain in his left thigh was diagnosed," said a statement on the club's website.

Real didn't put any specific time on how long they expected the Welshman to be sidelined, merely adding that his return would depend upon his recovery in the next few days.

Bale also missed La Liga games against Getafe on September 22 and Elche three days later due to a similar injury.

The 24-year-old is yet to play a full 90 minutes for Madrid following his reportedly world record breaking move from Tottenham Hotspur last month.

He started and scored on his debut against Villarreal, but has since been limited to substitute appearances against Galatasaray and in Saturday's 1-0 defeat to Atletico Madrid.

The player himself has admitted that he has been affected by his lack of a proper pre-season as his prolonged transfer dragged on until the penultimate day of the transfer window.

Comments
Topics mentioned in this article
Football Gareth Bale Barcelona Real Madrid
Get the latest updates on ICC T20 Worldcup 2022 and CWG 2022 check out the Schedule, Live Score and Medals Tally. Like us on Facebook or follow us on Twitter for more sports updates. You can also download the NDTV Cricket app for Android or iOS.