Karim Benzema has been excluded from national duty since he was placed under investigation over an attempt to bribe France teammate Mathieu Valbuena for a sex-tape. 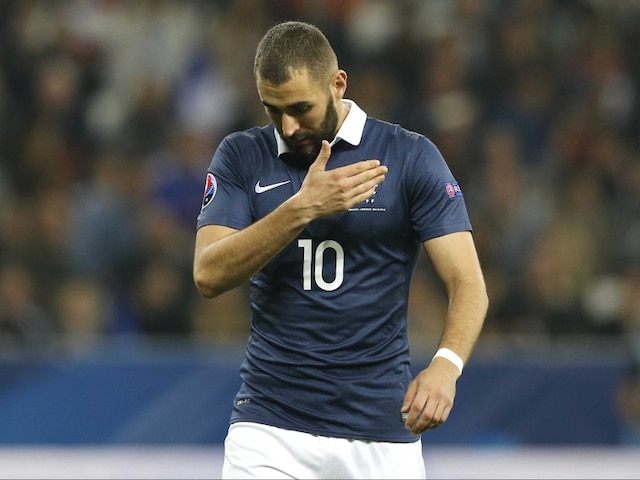 Karim Benzema has scored 25 goals in 76 appearances for France and is the highest goalscorer in the current squad.© AFP
Paris:

French Prime Minister Manuel Valls on Tuesday said Real Madrid star Karim Benzema should not be allowed to return to the France national football team while he remains at the centre of a sex-tape bribery inquiry. (Benzema Available For Euro 2016 After Legal Restrictions Lifted)

"I think that the conditions have not yet been met for Karim Benzema to come into the France team. He is still under investigation," Valls told French broadcaster RMC. (France to Announce Karim Benzema's National Team Fate)

Benzema, 28, is France's leading goalscorer, but has been excluded from national duty since he was placed under investigation over an attempt to bribe France teammate Mathieu Valbuena for a sex-tape. Benzema has been accused of complicity in the attempt.

"For young people, a great sportsman must be exemplary," the Prime Minister said, adding "(football) is our heritage, it's not something that just interests amateur sports fans, so we have to be careful, all acts and decisions have their importance".

Valls, whose words echoed those of France's Sports Minister Patrick Kanner on Monday, added: "At the same time it is a decision for the French football federation and the coach."

Benzema, whose hopes of playing at Euro 2016 had received a huge boost after his bail conditions were eased last week, later took to Twitter to express his frustration at Valls' comments.

"12 seasons that I'm professionnal: 541 matches played 0 red card 11 yellow cards!!! And some talk about me being exemplary???" Benzema tweeted.

France coach Didier Deschamps has made no secret of his desire to see Benzema return to the national team set-up, after the striker was indefinitely suspended by the French Football Federation (FFF) in December.

"On a sporting plan, I want to have the best players. You're not a striker at Real Madrid for five years with (Jose) Mourinho, (Carlo) Ancelotti, (Rafael) Benitez and (Zinedine) Zidane for nothing. All the countries envy us," Deschamps told French daily L'Equipe recently.

On Friday, an appeals court upheld an investigating magistrate's decision to lift restrictions placed on Benzema that prevented him from coming into contract with Lyon midfielder Valbuena, who was the target of the blackmail attempt.

The FFF said the decision to lift the legal restrictions was "a first step", but added that it would wait to see how the investigation unfold before deciding whether to recall Benzema.

A final decision will be taken by FFF president Noel Le Graet.

Comments
Topics mentioned in this article
France Karim Benzema Mathieu Valbuena Football
Get the latest Cricket news, check out the India cricket schedule, Cricket live score . Like us on Facebook or follow us on Twitter for more sports updates. You can also download the NDTV Cricket app for Android or iOS.