Veteran winger Franck Ribery, 35, has signed a one-year extension to stay at Bayern Munich until 2019, the German giants announced on Monday. 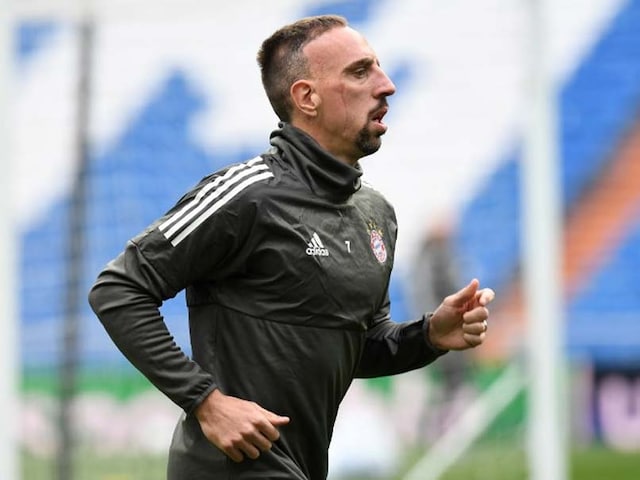 Veteran winger Franck Ribery, 35, has signed a one-year extension to stay at Bayern Munich until 2019, the German giants announced on Monday. "I am very happy to be able to play for another year at this great club," said Ribery in a statement. "Munich has long since become a home for my family and I, therefore, am proud to be able to play in the FC Bayern shirt next season." Ribery joined Bayern in 2007, scoring 80 goals in 247 Bundesliga appearances, and won the German league title for a joint record eighth time this season.

"We are very pleased that Franck has been retained," said Bayern's sports director Hasan Salihamidzic.

And that means more of this pic.twitter.com/qv3ow52i2D

"This season, Franck has proved once again in the Bundesliga, as well as in the Champions League and German Cup, what he is capable of and what great quality he has.

"He is also one of our crowd pleasers."

Despite a knee injury in October which kept him out for 10 games, Ribery, who will be 36 when his contract expires, has managed five goals in 19 league games this season.

He was a key figure when Bayern won the treble in 2013 of Bundesliga, German Cup and Champions League titles, providing 11 goals and 23 assists in a total of 43 matches.

It was Ribery's final pass which Arjen Robben converted for the winning goal at Wembley when Bayern beat Borussia Dortmund 2-1 in that year's Champions League final.

"When I came to Munich in 2007, I was looking to push my career to the next level," Ribery wrote on Instagram.

"But I never imagined winning eight German championships, the German Cup five times and the Champions League trophy with this club.

"But what I found above all that success is a place called home.

"Thanks to everyone who is supporting me, to my beloved family and friends, the best fans, team mates and staff.

"Let's work hard to make this time another glorious chapter in the story of the best club in the world."

However, according to reports, Ribery can expect to fight for his place next season.

Bayern are said to want to give priority to rising stars Serge Gnabry, 22, who will return from a loan spell at Hoffenheim, and Kingsley Coman, 21, who is currently sidelined by injury.

Fellow veteran Robben, 34, has also been offered a year's extension to his deal which expires in June, but the Dutch winger has yet to put pen to paper.

German magazine Kicker report that Robben, who joined Bayern in 2009, will not announce his decision until the German Cup final, against Eintracht Frankfurt on May 19 in Berlin, as he considered other offers.

Comments
Topics mentioned in this article
Bayern München Franck Ribéry Football
Get the latest Cricket news, check out the India cricket schedule, Cricket live score . Like us on Facebook or follow us on Twitter for more sports updates. You can also download the NDTV Cricket app for Android or iOS.