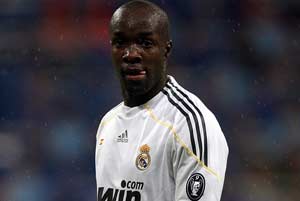 Diarra is the latest star player to leave Anzhi after its billionaire owner Suleiman Kerimov earlier this month decided to scale down the club's ambitions and drastically shrink its budget.

The contract with Lokomotiv is for four years, the club said in a statement late Tuesday. The value of the transfer was not disclosed but the Interfax news agency said it was worth 12 million euros ($16 million).

As a result of Kerimov's dramatic change in policy at Anzhi, almost all of the star players signed in a bid to make the Dagestan side world beaters are being put on the market.

After Diarra, the next big name to exit Anzhi appears set to be the classy Brazilian international attacking midfielder Willian, who Anzhi only signed at the end of last season.

Willian is poised to sign a deal with English Premier League side Tottenham Hotspur in a transfer worth 30 million sterling (35 million euros/$47 million), according to British media.

If the deal is confirmed, Willian would be the most expensive player ever sold by a Russian side.

Also expected to leave this season is Cameroon international Samuel Eto'o, who was the highest paid footballer in the world when he arrived at Anzhi.

The troubles of Anzhi, who came third in the premier league last year, have already hit their performance on the pitch and they are one off the bottom with just two points from five games.

Comments
Topics mentioned in this article
Dynamo Kiev Real Madrid Anzhi Makhachkala Football Igor Denisov Aleksandr Kokorin
Get the latest updates on IND vs NZ 2021, check out the Schedule and Live Score . Like us on Facebook or follow us on Twitter for more sports updates. You can also download the NDTV Cricket app for Android or iOS.