Former players joined the chorus of criticism directed at Wayne Rooney on Sunday after the Manchester United player appeared to elbow an opponent in the Red Devils 4-0 win at Wigan. 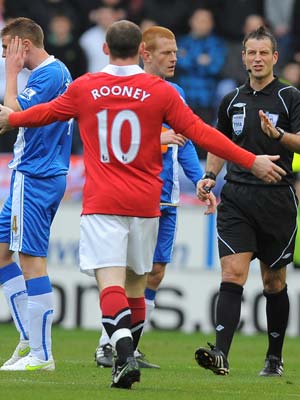 Former players joined the chorus of criticism directed at Wayne Rooney on Sunday after the Manchester United player appeared to elbow an opponent in the Red Devils 4-0 win at Wigan.

Rooney was given a yellow card on Saturday after a clash with Wigan's James McCarthy in which his arm made contact with the Latics defenders face.

Wigan boss Roberto Martinez said Rooney should have been sent off by referee Mark Clattenburg, who appeared to indicate that the collision was accidental.

However former Liverpool defenders Alan Hansen and Mark Lawrenson both agreed with Martinez that England star Rooney should have seen red.

"Every picture tells a story and sometimes you can't defend the indefensible," Lawrenson said on the BBC's Match of the Day programme.

Hansen added: "He (Rooney) is in big trouble. You can't argue with the pictures.

"McCarthy takes a step to his left to try and block Wayne. He (Rooney) swings the elbow. He has thrown the elbow, smacked him on the head and should have been off."

Although the incident was dealt with at the time, Rooney could yet face an FA charge should Clattenburg state in his report that he saw a collision but no use of an elbow.

If Rooney was charged with violent conduct, he could face a three-match ban that would rule him out of Manchester United's upcoming fixtures with Chelsea, Liverpool and either Arsenal or Leyton Orient in the FA Cup.

United manager Sir Alex Ferguson launched a pre-emptive strike on the outcry on Saturday, claiming that the media would seek to stir up controversy and pressure authorities to act.

" ... What will happen, the question has been asked and because it is Wayne Rooney the press will raise a campaign to get him hung by Tuesday or electrocuted or something like that," Ferguson said.

"It is unbelievable. Watch the press. It will be interesting to see it."