Chelsea star David Luiz shrugged off the brutal foul on him which saw Sergio Aguero sent off late in the 3-1 win over Manchester City. 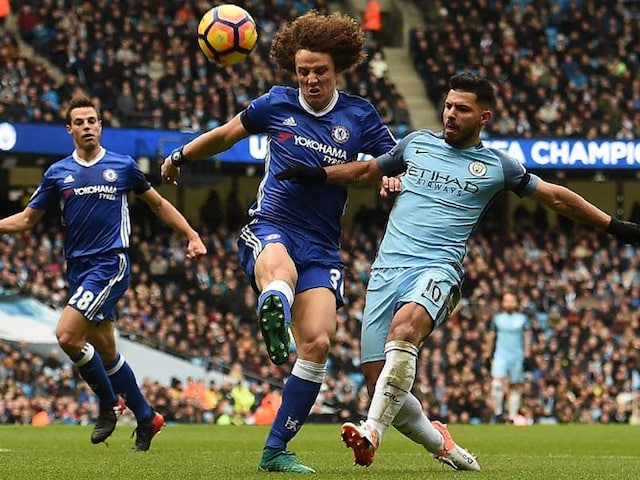 Chelsea star David Luiz shrugged off the brutal foul on him which saw Sergio Aguero sent off late in the 3-1 win over Manchester City preferring to see the good side of the Argentinian striker.

Luiz -- who was re-signed by Chelsea and since starred in the three centreback defence adopted by manager Antonio Conte -- said talking about bad things did nothing for the beautiful game.

Aguero's frustrations boiled over and he was given a straight red card for the high tackle on Luiz in time added.

The incident sparked confrontations which led to City being reduced to nine men as referee Anthony Taylor sent Fernandinho to the dressingroom.

"I don't like to publicise things. This is not part of the beautiful football," said Luiz.

"Aguero is an amazing player, he scores a lot, he wins a lot. It is better when you talk about Aguero to talk about good things rather than bad things.

"It is quite normal frustration when you don't win the game and I don't like to speak about negative things. It is normal in football -- when you win you be happy, when you lose you be sad."

Regardless of devout Christian Luiz' generous words Aguero faces a four match ban -- on account of already serving one suspension this season -- whilst Fernandinho could face further measures from the Football Association (FA) for shoving Cesc Fabregas into the crowd.

Comments
Topics mentioned in this article
Chelsea Manchester City David Luiz Sergio Agüero English Premier League Football
Get the latest Cricket news, check out the India cricket schedule, Cricket live score . Like us on Facebook or follow us on Twitter for more sports updates. You can also download the NDTV Cricket app for Android or iOS.