Steven Fletcher came off the bench to rescue a point for Wolves as his late goal capped a thrilling 3-3 draw against Tottenham at Molineux on Sunday. 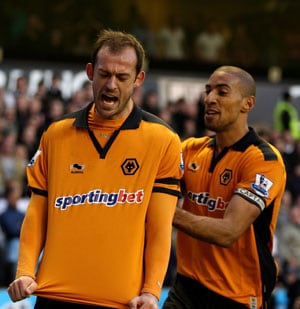 Steven Fletcher came off the bench to rescue a point for Wolves as his late goal capped a thrilling 3-3 draw against Tottenham at Molineux on Sunday.

Mick McCarthy's side looked destined for an undeserved defeat when referee Mark Halsey ruled out what looked like a late equaliser from Richard Stearman, but Fletcher ensured Wolves got their reward with his 87th minute leveller.

It was a suitably dramatic end to a pulsating encounter in which the lead changed hands several times.

That lead was short-lived as Ireland international Doyle equalised from the penalty spot but Roman Pavlyuchenko fired Spurs back in front before Fletcher's late intervention.

Jamie O'Hara, on loan at Wolves from Spurs, was ineligible to face his parent club, while Harry Redknapp left Aaron Lennon, Sebastien Bassong and Wilson Palacios on the bench ahead of Wednesday's clash with AC Milan and there was a place among the substitutes for Gareth Bale after a back injury.

Before kick-off there was a minute's applause from supporters in honour of former Wolves and Tottenham defender Dean Richards who died last week aged 36.

Wolves had already secured shock wins over Manchester United, Chelsea, Manchester City and Liverpool this season and it was the hosts who settled quickest.

Wolves were enjoying a sustained spell of possession and Hammill picked out the run of Milijas into the Spurs area but the midfielder could not keep his header down.

The hosts made the breakthrough in the 20th minute as Doyle bagged his seventh goal of the season.

Milijas delivered another quality cross and Doyle got in front of Gomes to flick his header into the net.

When Tottenham's Steven Pienaar was denied by a superb block from Christophe Berra, Luka Modric should have done better than drag the rebound wide.

That didn't matter for long as Defoe brought Spurs level on the half hour with a superb curling effort from the edge of the penalty area.

It was Defoe's first Premier League goal of the season but five minutes later another brilliant strike doubled that tally.

Modric's shot deflected back to Defoe and from the left of the area he curled a shot past Wayne Hennessey inside the far post.

Wolves hit back again and Doyle made it 2-2 in the 40th minute after Milijas had his shirt tugged by Hutton, who appeared to be the last defender.

Halsey decided not to send off Hutton before Doyle sent Gomes the wrong way from the spot.

Spurs needed only three minutes of the second half to regain the lead through Pavlyuchenko.

Jermaine Jenas was allowed to run unchallenged to the edge of the Wolves box before slipping the ball to Pavlyuchenko and he drilled a deflected shot past Hennessey.

Wolves came close to equalising and Stephen Ward glanced a header just wide before Gomes made a fine save to turn Milijas's low drive onto a post.

Bale made his return after injury in the 67th minute in place of Pienaar, while Fletcher was brought on for Hammill.

Stearman had the ball in the net from a Milijas cross but Halsey adjudged Gomes had been fouled.

Defoe came close to completing his hat-trick when his shot hit the post, but in the 87th minute Fletcher levelled with a header from Jarvis's cross.

Comments
Topics mentioned in this article
Football Tottenham Hotspur Steven Fletcher Steven Gerrard Birmingham City Everton Liverpool Chelsea Arsenal
Get the latest updates on ICC T20 Worldcup 2022 and CWG 2022 check out the Schedule, Live Score and Medals Tally. Like us on Facebook or follow us on Twitter for more sports updates. You can also download the NDTV Cricket app for Android or iOS.