The German Super Cup defeat to 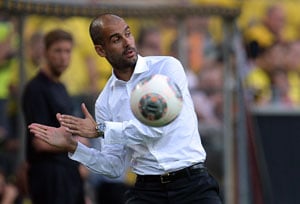 Bayern Munich boss Pep Guardiola said the European champions were unconcerned despite their 4-2 defeat to Borussia Dortmund in the German Super Cup -- a repeat of May's Champions League final.

It was the Spaniard's first loss since taking over from Jupp Heynckes, who last season steered Munich to become the first German team to win the treble of European, league and cup titles.

Bayern were without key midfielders Franck Ribery and Bastian Schweinsteiger and, with the Bundedesliga set to restart on August 9, Guardiola said the errors will be fixed.

"Overall, I am happy with the performance," said the 42-year-old ex-Barcelona coach, who suffered his first defeat in ten pre-season games since taking charge last month.

"We played well and what happened came down to individual situations.

"Even though we lost, I didn't get the feeling that Dortmund were better than us.

"We still have ten days to get ready for the Bundesliga restart and to correct our minor errors."

Despite the defeat -- Bayern's heaviest since losing the 2012 German Cup final 5-2 to Dortmund in Berlin -- captain Philipp Lahm said there was no cause for concern.

"We are still in our pre-season phase and conceeded the goals at the worst possible time," said Lahm, back in his preferred right-back position after having experimented in midfield.

"We'll analyse the game and then move on."

"It was a great game, both teams ran up and down like there was no tomorrow," beamed the Borussia boss.

"It's good to have won the Super Cup, when the winner is happy and the loser disappointed.

"We won, which is really great and when we play them in Munich, we will also want to win there.

"The main thing is Bayern aren't our main rivals, we are just focusing on us."

The home side took a sixth-minute lead, largely due to a mistake by Bayern keeper Tom Starke, who after a poor clearance was unable to keep out Marco Reus's diving header.

The match, in front of a sell-out 80,645 crowd, exploded ten minutes into the second half with three goals in as many minutes.

First up was Robben levelled with a far post header after a great cross from Lahm.

Seconds later, down at the other end, an almighty mix up resulted in Bayern defender Daniel van Buyten's back header slipping past a distraught Starke, standing in for the injured Manuel Neuer, to put Dortmund 2-1 in front.

And then to Bayern's disbelief Dortmund stretched their advantage when Ilkay Gundogan curled a shot from the edge of the box into the bottom corner.

Thomas Muller hit the bar late on for Bayern but Dortmund snatched a fourth via Reus, set up by new signing Pierre-Emerick Aubameyang, and the win gives Dortmund a boost for the new campaign.

Comments
Topics mentioned in this article
Football Borussia Dortmund Bayern Munchen Barcelona Marco Reus Lionel Messi Ilkay Gundogan Arjen Robben
Get the latest Cricket news, check out the India cricket schedule, Cricket live score . Like us on Facebook or follow us on Twitter for more sports updates. You can also download the NDTV Cricket app for Android or iOS.