Financially stricken Portsmouth, FA Cup winners in 2008, were on Thursday given the green light to start the new season despite remaining in administration. 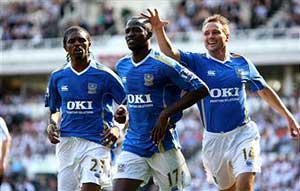 Financially stricken Portsmouth, FA Cup winners in 2008, were on Thursday given the green light to start the new season despite remaining in administration.

Portsmouth's future is uncertain after former owner Balram Chainrai withdrew his offer to buy the cash-strapped League One club, who were relegated from the Championship last season just two years after crashing out of the Premier League.

But, with the Pompey Supporters' Trust still hopeful of completing a takeover, the Football League have agreed to let Michael Appleton's side begin the season with a clash against Bournemouth at Fratton Park on Saturday.

A League spokesman said: "Given the ongoing dialogue between the administrator and the Supporters' Trust, the board has given its consent to Portsmouth beginning the new season in administration.

"The club will start on zero points, with the conditions of membership announced at the board's previous meeting - including a 10-point deduction, not coming into effect unless and until the club exits administration."