Zlatan Ibrahimovic scored his astonishing overhead kick goal against England hours too late to be named best goal in 2012 in a FIFA contest. 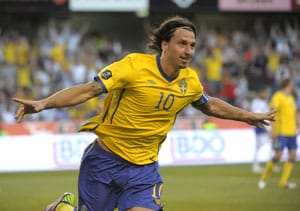 Zlatan Ibrahimovic scored his astonishing overhead kick goal against England hours too late to be named best goal in 2012 in a FIFA contest.

FIFA said on Thursday that Ibrahimovic's fourth goal in Sweden's 4-2 victory came after voting opened at 1400 GMT Wednesday for its 10 approved candidates for the Puskas Award.

"Given that a number of votes have already been cast for this year's award, the select committee for the Puskas Award may not, at this stage, include an additional nominee," FIFA said in a statement.

FIFA said the goal can be considered by its selection panel of experts as a candidate for the 2013 Puskas Award.

The 2012 award, named after Hungarian great Ferenc Puskas, will be announced Jan. 7 at the Ballon d'Or gala in Zurich.

Lionel Messi, Neymar and Rademal Falcao are among the contenders being voted for by visitors to fifa.com.

He reacted after England goalkeeper Joe Hart weakly headed the ball clear outside the penalty area. Facing away from the goal, Ibrahimovic leaped high and twisted to launch a looping shot which bounced into the unguarded net.

Ibrahimovic ripped off his shirt in celebration and ran to the halfway line to be greeted by teammates mostly laughing with surprise at what they witnessed.

The stoppage-time spectacle was a fitting end to the first international match at the new Friends Arena in Stockhom.

Ibrahimovic said it was "probably the goal I enjoyed the most" of those he scored for the national team.

"I've played a lot of good games. I've scored many nice goals," he said. "But the important thing was to win in the new arena, which I've said earlier, it feels like a Coliseum."

Comments
Topics mentioned in this article
Football Zlatan Ibrahimovic Mexico South Africa Republic of Ireland FIFA France
Get the latest updates on IPL 2021, IPL Points Table , IPL Schedule 2021 , live score . Like us on Facebook or follow us on Twitter for more sports updates. You can also download the NDTV Cricket app for Android or iOS.