England beat Canada 2-1 to set up a semifinal clash vs defending champions Japan, who earlier edged past Australia 1-0. 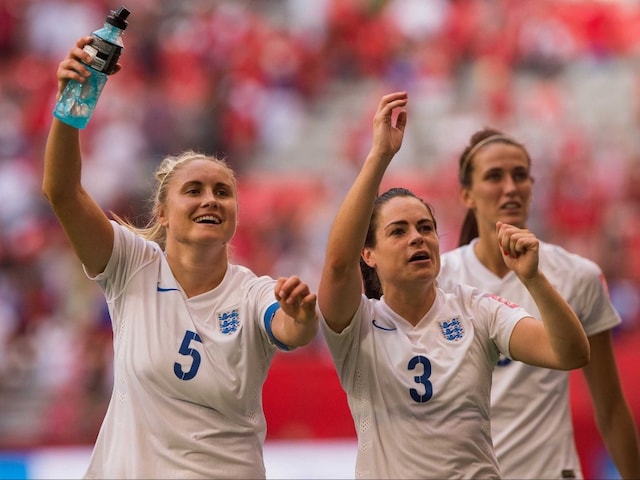 England ended hosts' Canada's dream at the Women's World Cup with a 2-1 win on Saturday to advance to the semi-finals for the first time where they play defending champions Japan who beat Australia 1-0.

An early goal blitz from Jodie Taylor and Lucy Bronze dampened the cheers of the 54,027 crowd in BC Place Stadium and kept England on track after losing their opening game of the tournament against France.

"The dream's over, it's not how we imagined it to end," said Canada coach John Herdman.

"We hadn't written the script to be 2-0 down that early. Gutted, gutted for all of Canada.

"They (England) were hard to break down. They went for it, good on them, they got their tactics right and won the match."

'The Three Lionesses' next meet Japan who dominated against Australia but needed an 87th minute goal from substitute Mana Iwabuchi to advance in their quarter-final game in Edmonton.

Former two-time winners Germany and the United States play the second semi-final in Ottawa on Tuesday, with England meeting Japan on Wednesday in Edmonton.

England were gifted the opener after 11 minutes following a howler by defender Lauren Sesselmann who proved to be the weak link in Canada's back line.

The 31-year-old Sesselmann swiped at the ball, missed and fell over, allowing Taylor to pounce and race towards goal past the onrushing Canadian defenders to finish off.

Just three minutes later the hosts were in disarray as Bronze headed in a second, with the stunned Canadian players immediately gathering into a huddle to try and regroup.

But captain Christine Sinclair pulled one back three minutes before the break following a blunder by Karen Bardsley in the England goal.

Earlier Iwabuchi, 22, came on after 72 minutes and got the breakthrough three minutes from time in a tense quarter-final dominated by Japan in scorching temperatures of 31 degrees Celsius (87 Fahrenheit)

It put the 2011 champions through to the last four along with Germany and the United States, as they bid to join the world's top two teams as two-time winners.

"As the Australian players were tired I said to Mana when I sent her in: 'you are going to decide it'," said Japan coach Norio Sasaki.

"The emotion that we created in 2011 we certainly would like to be able to recreate that for the Japanese people," said Sasaki.

Australia coach Alen Stajcic said it had been hard for his young side against an experienced Japan.

"They have already won a World Cup and Asian Cup, silver at the Olympics, you can tell, their chemistry's fantastic, they're technically superb."

Stajcic added: "Certainly the better team won. It's a heartbreaking experience for all of us."

It was a fifth win in as many games in Canada for the fourth-ranked Japanese, who beat Australia 1-0 in the Asian Cup final last year.

The Matildas, at 10th, the lowest ranked team left in the tournament, go home after getting past the knockout rounds for the first time in their history by beating Brazil 1-0 in the

Comments
Topics mentioned in this article
England Canada Japan Football
Get the latest Cricket news, check out the India cricket schedule, Cricket live score . Like us on Facebook or follow us on Twitter for more sports updates. You can also download the NDTV Cricket app for Android or iOS.