Pictures and video footage of Alli's gesture were widely shared on social media. 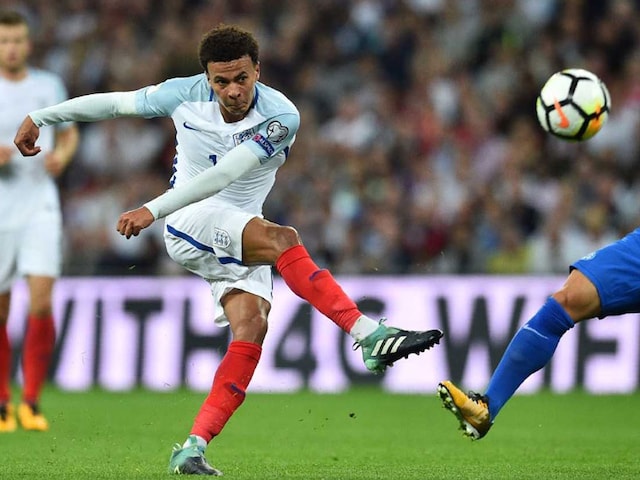 Dele Alli was caught making an obscene gesture during an England match.© AFP

FIFA has opened disciplinary proceedings against Tottenham Hotspur midfielder Dele Alli after the player was caught making an obscene gesture during an England match, the world governing body announced on Friday. Alli stuck his middle finger up during the national side's World Cup qualifier against Slovakia on Monday but said after the game the gesture had been directed at teammate Kyle Walker as a joke. But a FIFA spokesman said the incident was being investigated.

"We can confirm that disciplinary proceedings have been opened following this incident. Please understand we cannot comment further at this stage," the spokesman said.

Pictures and video footage of Alli's gesture were widely shared on social media but England manager Gareth Southgate played down the incident.

"Kyle and Dele were mucking about and Dele's made a gesture towards Kyle," Southgate told reporters at Wembley.

"The pair of them have a strange way of communicating! But that's what they've said when it's been raised."

Spurs boss Mauricio Pochettino, speaking on Thursday, had also played it down.

"It's true it's not a fantastic gesture but it's not a big issue. It was a joke in a moment with his teammate. I don't think it'll be a big issue with FIFA or with us."

Alli, 21, has had a number of run-ins with the football authorities and has faced calls to curb his fiery temperament.

He missed the Premier League title run-in in 2015-16 after punching West Bromwich Albion's Claudio Yacob and was sent off for a dangerous foul on Gent's Brecht Dejaegere during a Europa League game in February.

Comments
Topics mentioned in this article
Tottenham Hotspur England Dele Alli Football
Get the latest Cricket news, check out the India cricket schedule, Cricket live score . Like us on Facebook or follow us on Twitter for more sports updates. You can also download the NDTV Cricket app for Android or iOS.