FC Barcelona and Qatar Sports announced an agreement that Qatar Airways will be promoted on the FC Barcelona team shirts for the 2013-14 season. 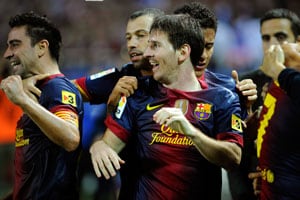 FC Barcelona and Qatar Sports announced an agreement that Qatar Airways will be promoted on the FC Barcelona team shirts for the 2013-14 season.

The agreement, signed Friday, is part of the contract signed by Barca and Qatar Sports in 2011, reports Xinhua.

Qatar Airlines replaces the Qatar Foundation as the main sponsor on the club shirt.

"Qatar Airlines are an ambitious brand with global aspirations, always committed to achieving the utmost excellence in its field. These are objectives with which FC Barcelona fully identifies," said club President Sandro Roselll.

"After sharing two fantastic years with Qatar Foundation, we are delighted to be continuing our relationship by welcoming them as our official Human Development Partner," he continued.

The move was also welcomed by Akbar Al Baker, CEO of Qatar Airways.

"We are delighted to form this alliance with FC Barcelona, the biggest football club in the world. Qatar Airways has been voted Best Airline in the World for two consecutive years (2011 and 2012) and will work with FC Barcelona on activities of benefit both to fans and passengers, offering tangible rewards to both organisations," he said.

Barcelona have a six-year agreement with Qatar Sports, which is worth around 177 million euros to the club.

Comments
Topics mentioned in this article
Football Barcelona
Get the latest updates on IPL 2021, IPL Points Table , IPL Schedule 2021 , live score . Like us on Facebook or follow us on Twitter for more sports updates. You can also download the NDTV Cricket app for Android or iOS.
Advertisement