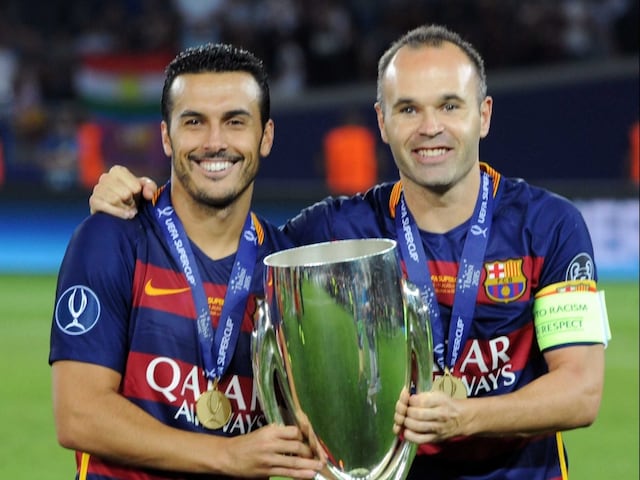 Spanish football club FC Barcelona's midfielder Pedro Rodriguez has asserted that he is reluctant to leave the reigning La Liga champions, but has been placed in a difficult situation.

English Premier League (EPL) giants Manchester United have been heavily linked with a lucrative bid for the 28-year-old in recent days as manager Louis van Gaal looks to bolster his attacking options.

Pedro came on as a late substitute in Tuesday's UEFA Super Cup win over Sevilla, with the club's technical secretary Robert Fernandez reportedly saying on Wednesday that the winger had asked to leave the club.

Pedro scored the winner for the Luis Enrique-coached side in extra time to give Barcelona a 5-4 win against Sevilla on Tuesday. But he was reluctant to join the trophy celebrations, sparking speculation that he is ready to move to United.

But Pedro insisted that if he does make the move to England, lack of playing time at Barcelona, rather than money will be the deciding factor.

"I don't want to leave Barcelona but it is a complicated situation. It is not a money question, but a continuity question. I want to play. Luis Enrique preferred other players and I have been waiting a lot of time," Pedro was quoted as saying by goal.com on Tuesday. (Victor Valdes Regrets Leaving Barcelona)

"I am not completely happy in the situation. Robert Fernandez said something he doesn't know. I spoke with the captains, the president, the coach... just a few seconds with him. I don't understand why he said I asked to leave using these words, he doesn't know how I feel in this team."

"I will always be a Barcelona supporter, no matter what finally happens. When there are rumours that I can leave it is not an easy situation for me. I have always tried to give my best to the club. I am ambitious and I want to play as much as possible," he added.

"I was angry when I knew I had to stay on the bench."

Comments
Topics mentioned in this article
Pedro Barcelona Manchester United Football
Get the latest Cricket news, check out the India cricket schedule, Cricket live score . Like us on Facebook or follow us on Twitter for more sports updates. You can also download the NDTV Cricket app for Android or iOS.