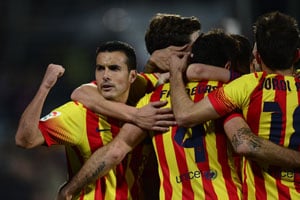 Barcelona ensured they will finish 2013 on top of La Liga as an eight-minute hat-trick from Pedro Rodriguez helped them come from 2-0 down to win 5-2 at Getafe on Sunday.

The hosts had got off to a flying start as goals from Sergio Escudero and Lisandro Lopez put them 2-0 up inside 14 minutes.

However, the Catalans responded like champions as Pedro scored three times in quick succession before the break.

Barca's comeback means they edge ahead of Atletico Madrid on goal difference at the top of the table, whilst Real Madrid can cut the gap on the top two to five points with a win at Valencia later on Sunday.

"I am just happy for the victory, the goals and to help the team," said Pedro, who also overtook Lionel Messi and Alexis Sanchez to become Barca's top scorer in La Liga with 10.

"It was important to finish the year well. It is always difficult coming here due to the way they play, the pitch and the fans.

"We didn't start how we would have hoped, but we turned the game around which is the most important thing."

Without the suspended Neymar and injured Messi, the spotlight was on the Catalans' fringe players in attack to make their claim for a regular starting spot.

"Pedro has a great eye for goal, everyone in Spain knows that," said the coach.

"He has a great attitude, he never gives up and he understands that he is an important player, even if he does play in an area of the field where Barcelona have other great players."

Barca had gotten off to a disastrous start as Escudero played a wonderful one-two with Angel Lafita before firing home from close range.

Despite such a poor opening, though, Martino praised his side's patience to find a way back into the game.

"I want to stress how we maintained our way of playing and continued in the manner we had planned before the match.

"Obviously we have to analyse what happened in the first 15 minutes, but we kept our heads and didn't panic which is the Barcelona way."

The Barca revival began 10 minutes before half-time when Fabregas released Pedro in behind the defence and his chipped finish had just enough elevation to take it past Miguel Angel Moya.

Pedro then curled home into the top corner from the edge of the area and pounced on a defensive error by Juan Valera to give his side the lead at half-time.

Diego Castro should have restored parity for Getafe when he curled inches wide of the far post after turning Gerard Pique inside the area on the hour mark.

And that miss was to prove crucial as Barca killed off the contest with a wonderful team move eight minutes later that culminated with Fabregas volleying home Pedro's cross at the back post.

Pedro could have had his fourth seconds later as his attempted lob of Moya drifted just over, but he was also involved in Barca's fifth as was clipped inside the area by Borja Fernandez and Fabregas sent Moya the wrong way from the resultant spot-kick.

Comments
Topics mentioned in this article
Football David Villa Pedro Lionel Messi Real Madrid Barcelona Getafe
Get the latest Cricket news, check out the India cricket schedule, Cricket live score . Like us on Facebook or follow us on Twitter for more sports updates. You can also download the NDTV Cricket app for Android or iOS.