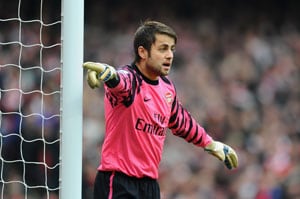 The Pole was injured during the warm-up ahead of Arsenal's Premier League match against Manchester City last month and has not played since.

It was a cruel blow for the 25-year-old, who this season had established himself as Arsenal's first choice, and Fabianski is now set to travel to Germany for surgery.

"We had bad news for Lukasz Fabianski because he needs surgery on his shoulder," Wenger said.

"He has decided after having seen a few specialists that he will have surgery in Germany. It means his season is over."

Wojciech Szczesny, who started the season as Arsenal's third choice goalkeeper, has impressed since stepping up to first-team action.

But the 20-year-old faces renewed competition from the fit-again Manuel Almunia.

"The competition for the places at the moment will be between Wojciech and Almunia," Wenger said.

"Wojciech will play the next game (against Newcastle on Saturday)."

Comments
Topics mentioned in this article
Football Arsenal Lukasz Fabianski
Get the latest updates on ICC T20 Worldcup 2022 and CWG 2022 check out the Schedule, Live Score and Medals Tally. Like us on Facebook or follow us on Twitter for more sports updates. You can also download the NDTV Cricket app for Android or iOS.