Ole Gunnar Solskjaer will not accept anything less than 100 percent in a competition he won twice as a player with Manchester United. 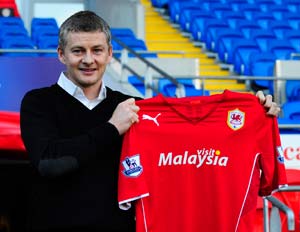 Ole Gunnar Solskjaer is raring to start as coach of Cardiff City and sees Saturday's third-round FA Cup clash at Newcastle as the perfect starting point.

With Premier League survival top of the Welsh club's agenda, Solsjkaer could be forgiven for looking to ease himself into life at his new club.

But, in the wake of Aston Villa manager Paul Lambert's claim the FA Cup was a distraction he could do without, Solskjaer will not accept anything less than 100 percent in a competition he won twice as a player with Manchester United.

"Every game is important," he said. "We know how close Cardiff were to lifting the cup a few years ago, so we go in there hoping to go through to the next round. The Premier League is very important but the FA Cup gives us a chance to build momentum.

"For me the game is great because it is the first game and I have had a six-week break since the Norwegian Cup final and I am eager to get going."

He added: "There is pressure in every football game. Every time you train and go out onto the pitch in the FA Cup, League Cup and Premier League there is a pressure on yourself and your pride says you go out and do your best.

"I have had success in the FA Cup a couple of times and walking around waving to the fans after winning it are memories you remember."

Comments
Topics mentioned in this article
Football Alex Ferguson Manchester City Arsenal Manchester United Bolton Wanderers
Get the latest Cricket news, check out the India cricket schedule, Cricket live score . Like us on Facebook or follow us on Twitter for more sports updates. You can also download the NDTV Cricket app for Android or iOS.