The Portuguese winger was only brought on as a substitute because of a first-half injury to Phil Jones but he certainly made his mark with a powerful second-half strike before setting up Javier Hernandez with a pinpoint cross. 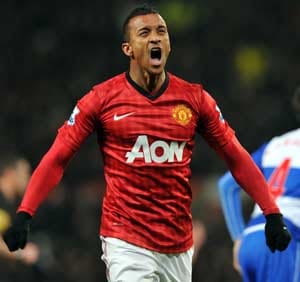 Nani scored one and made the other as Manchester United beat Reading 2-1 to book their place in the FA Cup quarter-finals here on Monday.

The Portuguese winger was only brought on as a substitute because of a first-half injury to Phil Jones but he certainly made his mark with a powerful second-half strike before setting up Javier Hernandez with a pinpoint cross.

United will now face the winner of Chelsea and Middlesbrough in the quarter-finals as Alex Ferguson's side continue to challenge for trophies on three fronts despite a late scare when Jobi McAnuff pulled one back for Reading.

"I'm satisfied with the quality of our play," said Ferguson, who made eight changes to the side that drew 1-1 with Real Madrid in last week's Champions League clash.

"We should have punished them better though.

"At 2-0 you are never comfortable. Nani deserved to be man of the match, his contribution was terrific. I had a feeling he would win the match for us. We are at home in the next round and we would take that against anyone."

"We came to Manchester United and put on a good performance as well, and we're disappointed not to be coming away with a result," said McDermott, whose side face a crucial Premier League relegation clash with fellow strugglers Wigan next Saturday.

United had come flying out of the blocks and Danny Welbeck gave Reading keeper Adam Federici his first work of the night a minute later with a low strike that was pushed away.

The Reading keeper pulled off a good save in the 22nd minute to deny Tom Cleverley's low shot before getting back on his feet to turn away Ashley Young's timid strike from close range.

Jones, after his impressive man-marking job against Cristiano Ronaldo last week, could be a doubt for the return leg in March after injuring his ankle in a clash with McAnuff and Nani replaced him.

Nani then got straight into the action with a rasping shot that beat Federici before cracking off the post and flying away from danger.

The winger then forced the Royals stopper into a decent save in first-half stoppage time with a long-range effort.

United started the second half like the first with Cleverley trying to drill a low effort through a crowd of players before Reading cleared.

A deflected header from Vidic off Sean Morrison had to be cleared off the line by Reading striker Noel Hunt who was playing with staples in a head wound after a clash with the Serbian defender in the first half.

Reading were being pinned back as van Persie replaced Young before Nani whizzed one by the post in the 65th minute.

The Portuguese winger was certainly out to prove a point after not making the starting line-up and when Antonio Valencia laid the ball to him in the area in the 69th minute, he took a touch before rifling the ball home for just his third of the season.

Le Fondre fired at De Gea within moments but the tie was all but put beyond the visitors in the 72nd minute when Nani crossed for Hernandez who headed in at the front post.

With nine minutes remaining, Chris Smalling failed to clear a cross and McAnuff pounced to pull one back for Reading but they could not get a second to force the replay as Le Fondre headed a corner just over in stoppage time.