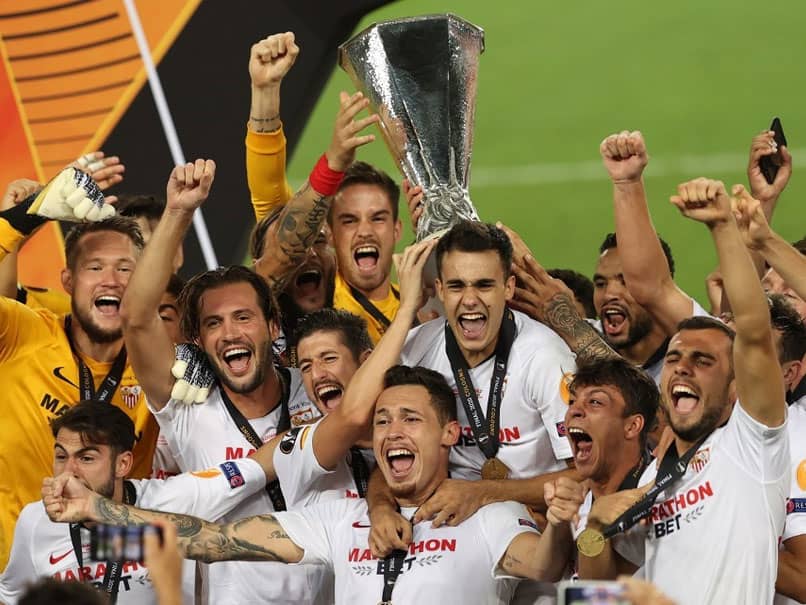 Europa League Final: Sevilla came back from being a goal down to beat Inter Milan 3-2.© AFP

Sevilla boss Julen Lopetegui said he does not look back at what might have been with Spain and Real Madrid after leading the Spanish side to a sixth Europa League title thanks to a 3-2 win over Inter Milan in a thrilling final in Cologne. Lopetegui was sacked as Spain boss days before the start of the 2018 World Cup for accepting the role as Madrid coach and then also fired by Real just four months later. But in his first season in Seville, the former Madrid and Barcelona goalkeeper has restored his reputation with a fourth-placed finish in La Liga and seeing off European giants Inter, Manchester United and Roma in the latter stages of the Europa League.

"Fortunately I don't look back," said Lopetegui. "I have the luck to be in a club that has given me this chance to be with a real team with everything that word means."

By contrast, Inter coach Antonio Conte suggested his time in Milan might be over after just one season despite finishing second in Serie A and leading the Italians to a first European final in 10 years.

"It is only right that we analyse the entire season, look at everything in a very calm way and try to plan the future of Inter, whether it's with or without me," said Conte.

"This year will always have a place in my heart, it's been such a strange year and exhausting year. It's been a worthwhile and incredible experience."

The outcome could have been very different had match winner Diego Carlos been sent off inside three minutes for hauling down Romelu Lukaku in the area.

Carlos was only shown a yellow card before Lukaku confidently slotted home his 34th goal of the season to equal his idol Ronaldo's record in his first season at Inter, which ended in the club's last UEFA Cup win 1997/98.

Luuk De Jong has been far from that prolific in his first season in Spain, but the Dutch international suddenly hit form at the right time as after scoring the winner in the semi-final against United, he powered home from Jesus Navas's cross and then looped another header into the far corner from Ever Banega's free-kick to turn the game around.

'Made fun of Conte's hair'

"I dedicate this to the Sevilla fans," said De Jong. "I got the feeling, even in the group stages, how important this cup is for them and we knew if we win this trophy if it also for them."

But the Uruguayan has now lost both after scoring in Atletico Madrid's defeat to Real Madrid in the 2014 Champions League final.

Tempers flared towards the end of a pulsating first-half with Conte booked for an altercation with Banega after the Argentine reportedly made fun of his hair.

Inter were made to rue wasting the better opportunities in the second half as their nine-year trophy drought continues.

Lukaku had the best chance as he raced through on goal 25 minutes from time, but just as in the semi-final victory over United, Sevilla goalkeeper Bono produced a vital save when needed.

And like so many of their previous five Europa League final victories, Sevilla conjured up a moment of magic allied with a slice of fortune they needed to again take the trophy they call their own back to southern Spain.

Inter failed to clear another Banega free-kick into the box and Carlos more than made amends for some of his heavy-handed defending with an overhead kick that deflected in off the unfortunate Lukaku.

"We are very disappointed but we have to move on," said Inter captain Samir Handanovic. "We just hope to play many other important games like this in the future. The foundations are there."

Romelu Lukaku Football
Get the latest updates on IPL 2020, check out the IPL Schedule for 2020 and Indian Premier League (IPL) Cricket live score . Like us on Facebook or follow us on Twitter for more sports updates. You can also download the NDTV Cricket app for Android or iOS.