England's Theo Walcott to sit out friendly against Italy

England winger Theo Walcott was ruled out on Tuesday of the friendly international away to Italy in Switzerland on Wednesday. 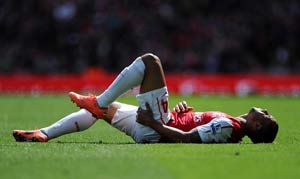 England winger Theo Walcott was ruled out on Tuesday of the friendly international away to Italy in Switzerland on Wednesday.

The Arsenal forward reported for squad duty with a "slightly bruised thigh", the Football Association said, and was unable to train fully. (Related: Balotelli out for Italy)

Walcott has now returned to Premier League side Arsenal as a precaution and no replacement will be added to the squad, which travelled to Berne on Tuesday.

But the only replacement called up has been City defender Joleon Lescott, included on Monday.

Comments
Topics mentioned in this article
England Cricket Team West Indies Cricket Team Australia Cricket Team Football Arsenal Udinese Wayne Rooney Italy
Get the latest updates on ICC T20 Worldcup 2022 and CWG 2022 check out the Schedule, Live Score and Medals Tally. Like us on Facebook or follow us on Twitter for more sports updates. You can also download the NDTV Cricket app for Android or iOS.