England have 13 points, four ahead of Slovakia with just the nine group winners in Europe guaranteed a place at the finals in Russia in 2018 World Cup. 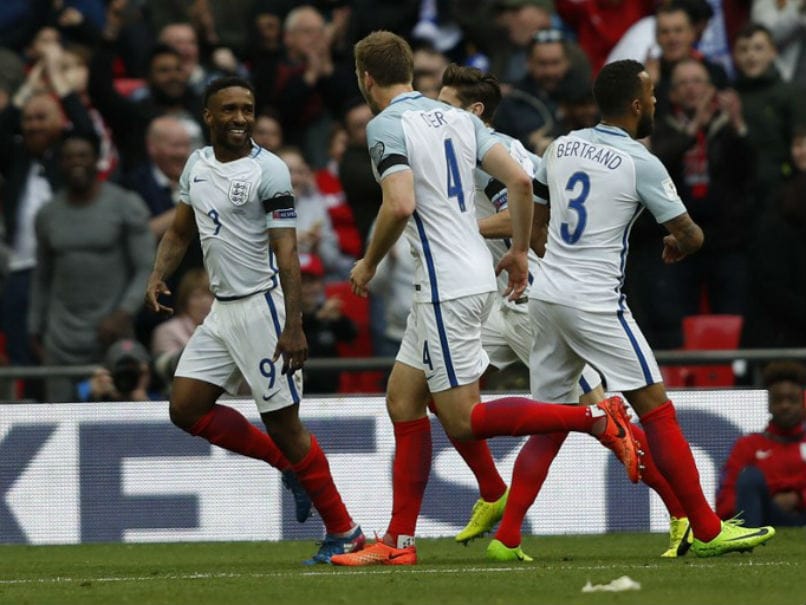 Jermain Defoe celebrates with teammates after opening the scoring for England against Lithuania.© AFP

England and defending champions Germany remained on course for the 2018 World Cup in Russia on Sunday while Danny Blind was sacked as Netherlands coach after his misfiring team faced missing a second straight major finals. At Wembley, Jermain Defoe marked his international comeback with a goal as England toiled to a 2-0 victory over Lithuania. Defoe, 34, who was making his first England appearance since November 2013, hit the target midway through the second half for his 20th international goal. Substitute Jamie Vardy added a second as England tightened their grip on first place in Group F.

Gareth Southgate's side are now the last team in European qualifying yet to have conceded a goal.

England have 13 points, four ahead of Slovakia with just the nine group winners in Europe guaranteed a place at the finals in Russia in 2018.

"We'd have liked a bit more, but I think really only one team came to win the game and it's always difficult to break down a packed defence," said Southgate.

Slovakia went second in the group with a 3-1 win at Malta while Scotland are six points off the pace after substitute Chris Martin scored an 88th-minute winner against Slovenia in Glasgow.

Germany maintained their 100 per cent record with a 4-1 win over Azerbaijan in Baku as they moved to 15 points in Group C.

The world champions and Switzerland are the only two teams in Europe to still have perfect records.

A brace from Andre Schuerrle and goals from Thomas Mueller and Mario Gomez saw Germany take their unbeaten away run in World Cup qualifying to 44 games.

Azerbaijan midfielder Dimitrij Nazarov, who plays in Germany, had netted an early equaliser to the delight of the home crowd before Joachim Loew's team stepped on the accelerator.

"It does me good to score goals, but it's up to me to take my performances back to Germany and repeat them for Dortmund," said Schuerrle.

Meanwhile, Blind was sacked as Netherlands coach after a 0-2 defeat to Bulgaria 24 hours earlier left the team's chances of reaching the finals hanging by the slenderest of threads.

Blind, 55, had been in charge since July 2015, but Saturday's loss in Sofia left the Dutch in fourth place in Group A, six points behind leaders France.

"It's a pity that it ends like this," said Blind.

The Dutch are three-time runners-up at the World Cup but the likelihood of missing out on the finals would be a bitter pill to swallow after they also failed to qualify for Euro 2016.

Northern Ireland stayed second in Group C, five points behind Germany, after a Jamie Ward goal in just the second minute and a Conor Washington strike on the half hour gave their team a 2-0 win over Norway in Belfast.

The Czech Republic are two points further back after trouncing San Marino 6-0.

The Czechs had already beaten San Marino 7-0 on two previous occasions and they were on their way to another rout on Sunday by leading 5-0 at the break with four goals coming in a devastating eight-minute spell.

Full-back Theodor Gebre Selassie added the fourth after 25 minutes before Michal Krmencik made it 5-0 just before the interval.

Darida hit the post twice in the closing moments of the first period but the Hertha Berlin midfielder was back on the scoresheet with a penalty after 77 minutes to make it 6-0.

Poland extended their lead in Group E to six points after Robert Lewandowski and Lukasz Piszczek scored in a 2-1 win at Montenegro.

In the same pool, Manchester United's Henrikh Mkhitaryan was on target in Armenia's 2-0 win over Kazakhstan to keep up their hopes of taking the runners-up place.

Comments
Topics mentioned in this article
England Germany Netherlands Jermain Defoe Jamie Vardy Football
Get the latest updates on IPL 2020, check out the IPL Schedule for 2020 and Indian Premier League (IPL) Cricket live score . Like us on Facebook or follow us on Twitter for more sports updates. You can also download the NDTV Cricket app for Android or iOS.