England have won all seven games in qualifying Group E and need only draw with the Swiss at Wembley to be sure of finishing in top spot. However, Switzerland make the trip buoyed by their remarkable performance in beating Slovenia 3-2 in Basel. 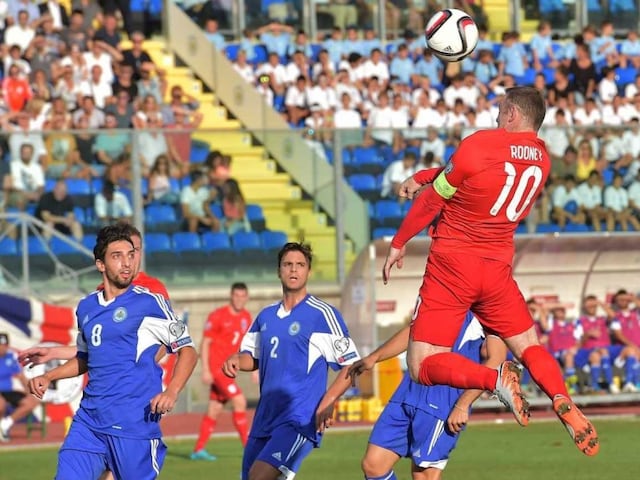 Wayne Rooney in action for England in the Euro qualifiers.© AFP

Rooney opened the scoring in Serravalle from the penalty spot in the 13th minute, leaving him with an identical international record to 1966 World Cup-winner Charlton of 106 caps and 49 goals.

England added to that goal before the interval via a Cristian Brolli own goal, and Ross Barkley's first goal for his country, along with late efforts from substitutes Theo Walcott, who scored twice, and Harry Kane completed a routine win.

"It's a proud moment to equal Sir Bobby Charlton's record," Rooney told ITV. "My aim is to push on and try and help the team win on Tuesday (against Switzerland) and break the record."

England have won all seven games in qualifying Group E and need only draw with the Swiss at Wembley to be sure of finishing in top spot. However, Switzerland make the trip buoyed by their remarkable performance in beating Slovenia 3-2 in Basel.

Slovenia looked set to claim a crucial win thanks to goals either side of half-time from Milivoje Novakovic and captain Bostjan Cesar. But the hosts were given hope when Borussia Moenchengladbach striker Josip Drmic came off the bench to pull a goal back in the 80th minute.

His fellow substitute Valentin Stocker equalised with six minutes to go and the stage was set for Drmic to score a dramatic winning goal four minutes into injury time.

Estonia remain right in contention too after a second-half Konstantin Vassiljev strike secured a 1-0 win at home to Lithuania.

In Group C, defending European champions Spain took a big step towards returning to the finals by defeating Slovakia 2-0 in the northern city of Oviedo.

Slovakia travelled to Spain with a perfect record in qualifying but there was to be no repeat of their 2-1 victory when the sides met last year as Jordi Alba headed home from a superb David Silva ball inside five minutes.

Andres Iniesta then scored from the penalty spot on the half-hour after Slovakia goalkeeper Matus Kozacik was harshly adjudged to have brought down Diego Costa.

"We needed to win to put ourselves in a good situation. It's job done and now we need to think about the next match," Iniesta told Television Espanola, and Spain are top of the group before facing Macedonia on Tuesday.

Ukraine remain in contention after beating Belarus 3-1 with first-half goals from Artem Kravets, Andriy Yarmolenko and Yevhen Konoplyanka, the latter a penalty.

Sergei Kornilenko scored a second-half penalty for the visitors and Ukraine ended the game with 10 men after Denys Garmash was dismissed in stoppage time, but Mykhailo Fomenko's men are now just three points behind Spain and Slovakia.

Elsewhere in Group C, Luxembourg registered a rare win as Sebastien Thill marked his international debut with a stoppage-time goal to beat Macedonia 1-0.

Austria need just one more point to qualify for a European Championship outside their own country for the first time after beating Moldova 1-0 in Vienna in Group G.

Zlatko Junuzovic of Werder Bremen got the only goal of the game in the 52nd minute, leaving Marcel Koller's side on the brink of qualification.

They would have been assured of their finals berth already had Russia not beaten Sweden, but Artem Dzyuba scored to hand the hosts a 1-0 win in Moscow in their first qualifier since Leonid Slutsky replaced Fabio Capello as coach.

With only the top two guaranteed automatic qualification, Sweden -- who saw captain Zlatan Ibrahimovic go off injured -- remain in second place before hosting Austria on Tuesday, but Russia are just a point back in third and go to Liechtenstein next.

"It was a very important match," Slutsky said. "Now we need to win all of the remaining matches and wait for our rivals to slip up."

Montenegro beat Liechtenstein 2-0 in the night's other game with goals from Fatos Beciraj and Stevan Jovetic.

Comments
Topics mentioned in this article
England Spain Austria Switzerland Slovenia Football
Get the latest Cricket news, check out the India cricket schedule, Cricket live score . Like us on Facebook or follow us on Twitter for more sports updates. You can also download the NDTV Cricket app for Android or iOS.