East Bengal questioned why retired Supreme Court Justice A K Ganguly was appointed in the first place to find out if Mohun Bagan violated rules if his decision was to be reversed later. 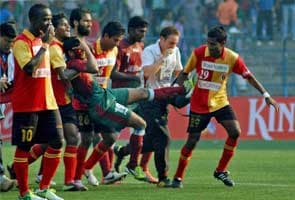 East Bengal on Tuesday lambasted the AIFF's move to revoke the ban on Mohun Bagan with its general secretary Kalyan Majumdar hinting at "under-table dealings" to arrive at the decision.

Reacting sharply to the lifting of ban on Bagan, Majumdar raised questions on how a two-year ban could be revoked for just a Rs 2 crore.

"I want to know what had happened. I doubt and feel that there must be some under-table dealings," Majumdar told PTI.

"It's very sad yet true that Indian football is going to the nadir under the current dispensation of the AIFF," he said.

Majumdar questioned why retired Supreme Court Justice A K Ganguly was appointed in the first place to find out if Mohun Bagan violated rules if his decision was to be reversed later.

"Where was the justice? The verdict by honourable former SC justice Ganguly has been thrown aside. We all know that the ban was given under the Clause 22 (a) of the AIFF but now we want to know under which provision this has been waived. I want to know the rule and the clause," he said.

"Lifting the ban means Mohun Bagan have been exonerated."

Majumdar said his club would protest against the the AIFF's decision in the proper platform.

"We will raise this issue vociferously but the point is whether it would be heard or fall on deaf ears," he said.

Mohun Bagan were a goal down against arch-rivals East Bengal in their Kolkata derby on December 9 when a stone hurled from one of the stands hit midfielder Syed Rahim Nabi which led to the club officials deciding not to field the side in the second half, leading to a two-year ban.