Dortmund have plan of attack for Real Madrid: Klopp

Borussia Dortmund boss Jurgen Klopp said on Monday that his side had discovered a way to cause Real Madrid trouble ahead of the sides' Champions League clash at the Bernabeu on Tuesday. 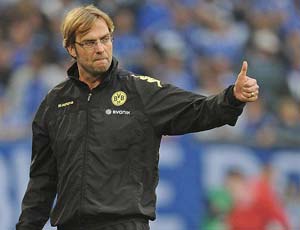 Borussia Dortmund boss Jurgen Klopp said on Monday that his side had discovered a way to cause Real Madrid trouble ahead of the sides' Champions League clash at the Bernabeu on Tuesday.

"I think that given the first match, we can say that we found a way of creating problems for Real, by occupying spaces well," Klopp told a news conference in Madrid, referring to his side's 2-1 win a fortnight ago.

The Dortmund boss was quick to qualify his remark, saying: "Madrid are a team that produces a lot of play, with very technically-gifted players. When (Angel) Di Maria gets into central positions and turns onto his left foot, it's sometimes he alone who decides the fate of a match. Ditto for (Cristiano) Ronaldo.

"We had great respect for Real Madrid before the first match, but ahead of the return fixture here, it's even greater because we think that after their defeat in the first game, Los Merengues will be especially motivated."

Asked if his side would succumb to fear in the Spanish capital, Klopp simply retorted that he was happy to be "at the Bernabeu for the first time".

He responded to Jose Mourinho's claim that Dortmund were a candidate for the title if they could safely navigate their way through Group D, by playing down his counterpart's comments.

Dortmund are on seven points and hold a one point lead over Real while Ajax are on three and big spending English champions Manchester City have garnered just a point after three games.

"It wasn't long ago, we were asking how we would play a role in this very tough group. So, we will first concentrate on tangible goals, and then we will see."

Klopp also refused to reveal his starting line-up for Tuesday's clash, saying he still had some adjustments to make, particularly with the uncertainty surrounding captain Sebastian Kehl, who suffered a broken nose during a goalless draw with Stuttgart over the weekend.

"He will have to wear a mask which I have yet to see. But if he feels he is able to see well, he should play," said the Dortmund coach.

Comments
Topics mentioned in this article
Football Real Madrid
Get the latest Cricket news, check out the India cricket schedule, Cricket live score . Like us on Facebook or follow us on Twitter for more sports updates. You can also download the NDTV Cricket app for Android or iOS.