Los Angeles' star trio David Beckham, Robbie Keane and Landon Donovan combined for the winning goal as the Galaxy claimed the Major League Soccer title with a 1-0 win over the Houston Dynamo on Sunday. 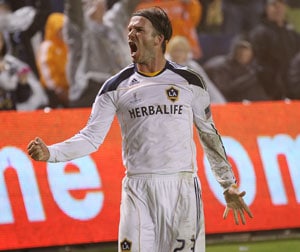 Los Angeles' star trio David Beckham, Robbie Keane and Landon Donovan combined for the winning goal as the Galaxy claimed the Major League Soccer title with a 1-0 win over the Houston Dynamo on Sunday.

Beckham won his first MLS championship in the final game of his groundbreaking five-year contract with the Galaxy, who rolled through the playoffs to the franchise's third league title after finishing with MLS' best regular-season record.

The winning goal came in the 72nd minute. Beckham delivered an alert header to Keane, who made a run and eventually fed the ball to Donovan, who struck home his record 20th MLS playoff goal.

Beckham lifted Donovan - selected the MLS Cup MVP - off his feet with a hug after the final whistle in the Galaxy's record seventh appearance in the league title game.

Los Angeles had the most expensive and highest-profile squad in MLS history after Irish striker Keane joined this season from Tottenham to become the third pin-up star.

The Galaxy got full value from their three highest-priced players, particularly in the playoffs. Beckham's assist was his fourth of a stellar postseason, while Donovan scored in each of the Galaxy's final three playoff games, and Keane was a serious offensive force despite criss-crossing the Atlantic on Irish national team duty.

A sellout crowd of 30,281 at Home Depot Center - where the Galaxy didn't lose a game all season long - cheered Los Angeles past the Dynamo, who hadn't lost in nine games since Sept. 10. Houston struggled for attacking options after losing leading scorer and league MVP runner-up Brad Davis to a torn quadriceps in the Eastern Conference championship game.

Beckham put a stylish finish on the best season of his five-year stint with the Galaxy, finishing second in MLS with 15 assists while spending the entire season in Los Angeles. The English superstar hasn't decided where he'll play next year, but the Galaxy hope he extends his California sojourn for at least another season.

This championship had been the Galaxy's to lose since early in the season. Los Angeles dominated the league and won the Supporters' Shield with the second-best regular-season record in MLS history, and the Galaxy didn't disappoint in the playoffs as they did last season.

Donovan also earned vindication in his fourth career MLS championship. The U.S. national team star gave up his Galaxy captaincy to Beckham early in their tenure, but got it back as his initially fractious partnership with Beckham matured over the past three seasons.

The Galaxy dominated play in the scoreless first half, with the cautious Dynamo sitting back while Los Angeles pressed. Beckham was the most creative attacker, but the Galaxy struggled to finish his service - nobody more than forward Adam Cristman, who replaced injured Chad Barrett in the starting lineup.

Beckham put a perfect corner kick onto Cristman's head in the 12th minute, but the Los Angeles forward botched the finish. He then missed back-to-back chances starting in the 27th minute, failing to convert another header on Beckham's pass over the defense before losing his footing and misplaying a ball from Donovan inside the penalty area moments later.

After Keane barely missed a shot across the mouth of the goal early in the second half, he slipped a shot between goalkeeper Tally Hall's legs in the 56th minute, but was whistled offside by the smallest of margins.

Comments
Topics mentioned in this article
Robbie Keane Landon Donovan Football
Get the latest updates on IPL 2020, check out the IPL Schedule for 2020 and Indian Premier League (IPL) Cricket live score . Like us on Facebook or follow us on Twitter for more sports updates. You can also download the NDTV Cricket app for Android or iOS.