Guardiola has been given the unenviable task of improving a team that won the Champions League, the Bundesliga and the German Cup under Jupp Heynckes last season, but he says he is relishing the challenge. 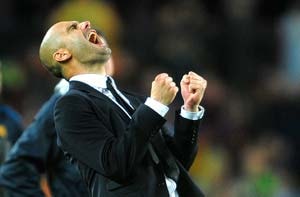 Manager Pep Guardiola watched his Bayern Munich team outclass Manchester City 3-1 and then warned the rest of Europe that the Champions League holders can get even better.

Bayern produced a display of dizzying control at the Etihad Stadium on Wednesday, dominating possession of the ball and attacking in relentless waves that threatened to engulf Manuel Pellegrini's side.

At 3-0 up, the visitors began to exchange passes with almost disdainful ease, before a goal from Alvaro Negredo gave a measure of respectability to the scoreline as City mustered some belated resistance.

Guardiola has been given the unenviable task of improving a team that won the Champions League, the Bundesliga and the German Cup under Jupp Heynckes last season, but he says he is relishing the challenge.

"I'm lucky to be here, to be training these players," said the former Barcelona coach.

"They've shown how good they are in the last four years, reaching three finals of the Champions League.

"What we try is to play as well as possible and try to dominate our league, the Bundesliga, because in the last three years, Borussia Dortmund won twice and Bayern just one, and what's why you have to keep going.

"But today (Wednesday) we are so, so happy for our performance. It's nice for Bayern, coming in this country that loves football so much and playing like we have played today."

However, although he conceded that he had seen his side's best performance of the season to date, Guardiola warned that his players will need to improve their defending of set pieces if they are to repeat last season's triumphs.

"Our set-up plays was a catastrophe, was terrible. We have to improve that," he said.

"In general I'm so happy, but it's not the end. It's not the final of the Champions League -- it's just the second game of our round, so we have time to improve and recover players. Little, little steps forward."

The only disappointment for the visitors, Negredo's goal aside, was the late dismissal of former City defender Jerome Boateng for a last-man foul on Yaya Toure, but Guardiola said he had no complaints about the decision.

City manager Manuel Pellegrini displayed a much less sunny disposition in his post-match press conference, declaring that his team had played "really bad".

An error from Joe Hart enabled Franck Ribery to put Bayern ahead in the seventh minute, with Thomas Mueller and Arjen Robben adding quick-fire goals early in the second half before City finally awoke.

It was the latest in a string of blunders by Hart, whose performances have already come under scrutiny this season, but Pellegrini refused to lay the blame at the door of the England goalkeeper.

"I think we didn't play well. Of course, I think the three goals we can all do it better, not only the goalkeeper. And you can concede goals to Bayern Munich because it's a strong team."

The defeat followed hot on the heels of a 3-2 loss at Aston Villa in the Premier League and Pellegrini admitted that he was mystified by the failings exhibited by his team.

"We started playing well, but after the first goal, our team felt the goal and we started losing the ball and that's very dangerous with this team," said the Chilean, who has failed to beat Guardiola in nine encounters.

"Of course I was surprised by the game we played today. The goal of Negredo was just a little thing at the end of the match, but I think the difference between Bayern Munich and Manchester City was the difference you saw today the whole game."

Nonetheless, Pellegrini insisted that his team "have the level to try to qualify to the round of 16".

Comments
Topics mentioned in this article
Lionel Messi Football Barcelona Inter Milan
Get the latest updates on ICC T20 Worldcup 2022 and CWG 2022 check out the Schedule, Live Score and Medals Tally. Like us on Facebook or follow us on Twitter for more sports updates. You can also download the NDTV Cricket app for Android or iOS.