Wilfried Zaha rocked Chelsea as Crystal Palace breathed new life into the Premier League title race with a stunning 2-1 win over the leaders at Stamford Bridge on Saturday. 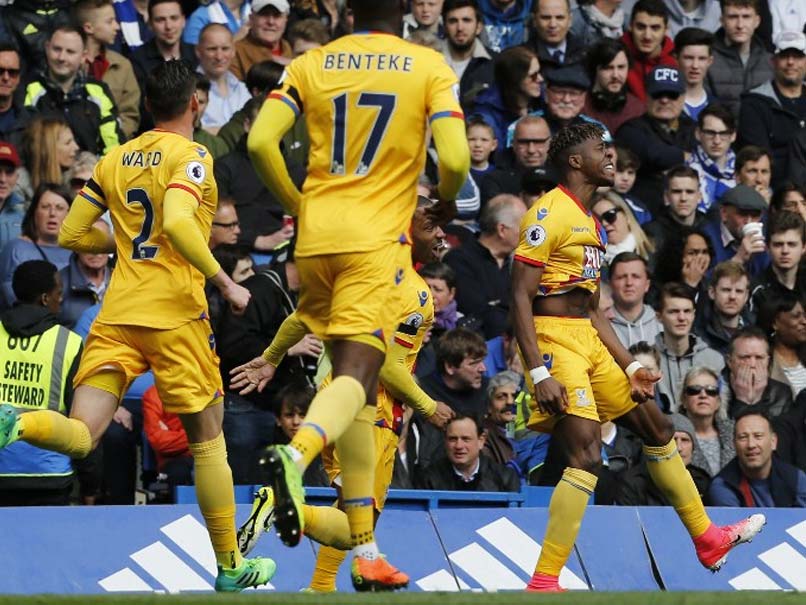 Wilfried Zaha rocked Chelsea as Crystal Palace breathed new life into the Premier League title race with a stunning 2-1 win over the leaders at Stamford Bridge on Saturday. In a frantic start, the Ivory Coast winger cancelled out Cesc Fabregas's opener and teed up Christian Benteke for the winner as Chelsea lost at home for the first time since September 16. Second-place Tottenham Hotspur took advantage by winning 2-0 at Burnley to trim Chelsea's lead to seven points. "I'm stunned. They're top of the league. No-one would expect us to come here and do that," said Zaha, whose side have won four games in a row.

"We know there's talent here. We just needed to work together. Everyone is seeing it now."

Liverpool closed to within 10 points of Chelsea, albeit having played a game more, after sinking Everton 3-1 in the Merseyside derby.

But Manchester United lost ground in the race for top-four places following a frustrating 0-0 draw at home to West Bromwich Albion.

Zaha's headline-grabbing display against Chelsea followed a week of headlines about his decision to switch international allegiances from England to Ivory Coast last year.

His side fell behind in the fifth minute when Eden Hazard crossed from the left for Fabregas to score at the near post.

But Zaha levelled matters in the ninth minute, drilling home through a posse of defenders, and two minutes later his pass freed Benteke to dink a cocky finish over Thibaut Courtois.

"This is football. We must accept this result," said Chelsea manager Antonio Conte.

"In every game in England, anything can happen. The league is so strong."

Tottenham kept their title hopes flickering after Eric Dier scored from close range and Son Heung-Min converted a cross from Dele Alli in the second half at Burnley.

However, victory came at the cost of injuries to midfielders Victor Wanyama and Harry Winks, who was taken to hospital with a potentially serious ankle injury.

Philippe Coutinho scored a dazzling goal and made another for Divock Origi as Liverpool overcame Everton at Anfield.

- Leicester resurgence continues -
Sadio Mane put Liverpool in front in the eighth minute, drilling in following a one-two with Roberto Firmino, but was later forced off by a knee injury.

Matthew Pennington equalised, but Coutinho strolled past him to restore Liverpool's lead with a fine, curling effort and then teed up Origi, Mane's replacement, to slam home Liverpool's third.

Everton midfielder Ross Barkley was fortunate to avoid a red card for a crude foul on Dejan Lovren, but his manager Ronald Koeman felt Liverpool's protests were excessive.

"I don't like coaches from the bench the whole time shouting to referees and linesmen, making a big show about tackles," he said. "They were crazy. It's a man's sport."

Manchester United now lie four points off the Champions League positions in fifth place after being held to an eighth draw of the season at Old Trafford by West Brom.

Anthony Martial and Marouane Fellaini squandered good chances for Jose Mourinho's men either side of half-time.

But former United midfielder Darren Fletcher almost snatched victory for West Brom with a shot that David de Gea pushed against the bar.

"We have a lot of draws this season," Mourinho told the BBC in a spiky post-match interview.

"Teams come here just to defend. Goalkeepers come here to be man of the match. We cannot score a goal even when we are one-on-one."

The champions prevailed through a glorious 25-yard strike from Wilfred Ndidi and a sharp Jamie Vardy volley, leaving them six points clear of the relegation zone.

Andy Robertson and Andrea Ranocchia wiped out Andy Carroll's opener as third-bottom Hull City came from behind to win 2-1 at home to West Ham United.

It left Marco Silva's side below fourth-bottom Swansea City on goal difference alone.

South-coast rivals Southampton and Bournemouth meet at St Mary's in the late game.

Comments
Topics mentioned in this article
Crystal Palace Liverpool Chelsea Manchester United Tottenham Hotspur Wilfried Zaha Christian Benteke Eric Dier Football
Get the latest updates on ICC T20 Worldcup 2022, check out the Schedule and Live Score. Like us on Facebook or follow us on Twitter for more sports updates. You can also download the NDTV Cricket app for Android or iOS.